The Scarifyers: Saving Great Britain Since 1936 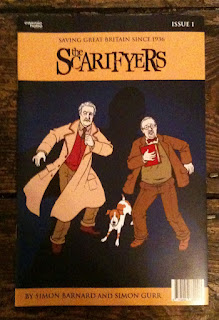 The Scarifyers haven't really been saving Great Britain since 1936. They've only been around since 2007. The Scarifyers is an excellent radio programmer set in 1936 (and onwards), and is about the exploits of the elderly Detective Inspector Lionheart, a sharp 70-something man of action, and Professor Dunning, a naive but brilliant old duffer. Terry Molloy plays Dunning, and until his death, Nicholas Courtney – the Brigadier from Doctor Who – played Lionheart. In a way, they remind me of one of my other favourite detective pairings, Christopher Fowler's Bryant and May. Now Dunning is assisted by Harry Crow.


I have to confess, I wasn't struck on the programme when I caught in snippets, but after sitting down to listen to it properly (it's on the Sunday evening slot on Radio 4 Extra some weeks) it's become one of my favourite shows, and I hate missing it. It's fantastic for fans of old-school horror; a little bit Lovecraft, a little bit Dennis Wheatley, and humorous yet played completely straight. I think it's the latter aspect that makes me love it so much. Dunning does come out with unbelievably silly lines, but Molloy doesn't act like he knows they're silly lines: it's part of Dunning's character. There's none of the archness of, say, Mark Gatiss' Lucifer Box.

The storylines are great, combining the early 20th century adventure story with classic horror. For example, in 'The Devil of Denge Marsh' the pair are looking into mysterious goings-on connected with an early radar base, whereas in 'For King and Country' strange deaths connected to electrical appliances lead them to an undead horde threatening to disrupt the Coronation. Daft, but also terrific fun.

Now there's a Scarifyers comic too. Issue 1 contains the first part of the first radio story, 'The Nazad Conspiracy'. I really like the fact that the Dunning and Lionheart of the comic really look like Courtney and Molloy. Now Courtney's no longer with us, it feels a little like his last visible acting role. (He may be the Brigadier to you, but he will forever be Lionheart to me.) You can buy the comic from programme maker Cosmic Hobo's website.
Labels: 1930s comics horror radio