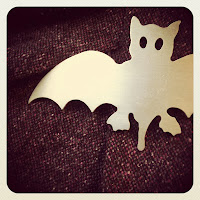 Still eerie ninety years on, Nosferatu is one of the all-time classic vampire films. Yesterday Mr Robot and I went to see it at the Holburne Museum in Bath, complete with a live accompaniment by Minima. If I hadn’t seen a tweet about it from a local cinema on Saturday we’d have missed it entirely – so, thanks, Twitter and The Little Theatre!

I love watching silent films on the big screen, but the fact that it was Minima performing the music was really exciting. I saw them playing to The Cabinet of Dr Caligari back in March 2010, and they were exceptionally good. Sometimes when excellent musicians play along to a silent film, they fail to provide an excellent accompaniment because there’s almost a fight for your attention. Minima don’t make this mistake; their soundtracks are dramatic and appropriate and enhance rather than detract from what’s on screen.

I have to say, the Holburne isn't the best venue for a film. They left the lights on in the hall outside the gallery where the film was showing, and the light coming in through the glass doors was distracting at first. The floor is level, so if you're stuck behind someone who keeps shuffling around, you have to shuffle round too to look past their head, as poor Mr Robot found. Also, there were a few idiots there who clearly were not there to appreciate the film and made stupid hooting and giggling noises – if you can't watch a historic film without expecting modern CGI-style effects, don't bloody well go! Grr!

Nonetheless, seeing Nosferatu on a big screen with live accompaniment was a revelation. I've seen the film before, and to be honest, it's not one of my favourites, but with the atmospheric, beautiful music (if you like late 70s to mid-80s goth music, you'll love Minima's accompaniment to this film) it had so much more atmosphere and depth. I'm not sure what version they showed, but the intertitles were clearly translated by someone who didn't have English as a first language, a couple of the words or phrases were slightly off. (I was quite amused by the ones talking about the vampire sleeping in 'goddamned soil'!) Even so, it was wonderful, and I got engrossed enough to ignore the whooping fools and the intrusive light. If you get the chance to see Minima on their current tour, GO.

Fashion note: my outfit was entirely uninteresting, being my dark purply-burgundy tweed dress again (when that wears out, they will hear my WAAAAH of distress in Australia), but I did attempt to strike a seasonal note with a brushed aluminium bat brooch. The brooch, which was a gift many years ago from my dad, got loads of compliments at work, and I like its spooky-deco look.
Labels: 1920s film Halloween horror silent