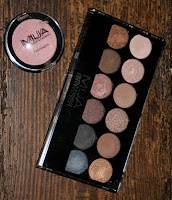 I tend not to be adventurous with makeup. Even when I was in my early 20s and wore a lot of very obvious eye makeup (classic goth: masses of black eyeliner all topped off with a pile of brownish-black or dark plum eyeshadow) I tended to stick to the same thing every day. Over the years as my personal style has shifted to something quieter I’ve moved to neutral eye colours and less eyeliner, closer to a 50s look most days. Of late, though, I’ve had a real craving for some new eyeshadows.

There are things I will spend money on and things where I’m stingier; if the choice is between high-end makeup and cheap skincare or cheap makeup and quality skincare, I’ll always put my money into skincare. It’s the thing everything else sits on, and you can’t replace it. My skin is very dry, so I’ve always been picky about my moisturisers. The best combo I’ve found for my face is Olay Regenerist Serum (not the more expensive three-point serum) with Boots No. 7 Moisture Surge night cream on top. It’s spendy, but it stops my face getting all red and sore, and I’m sticking with it. So, I tend to splurge on creams and save on colours.

I’d probably never have considered MUA (from Superdrug) if A Thrifty Mrs hadn’t recommended the brand as they’re priced so low I’d have been suspicious of the quality. The single colour cost £1, and the palette £3. They’re not bad at all – not as densely pigmented as some more expensive brands, but as I prefer to keep coverage light that’s not a problem for me. They did have many more adventurous colours, if you prefer livelier shades. I like having all the different neutrals to choose from each morning, and the colours are small so I don’t mind the fact that I probably won’t use the two darkest ones. It’s not too big a waste.
Labels: accessories