A Grand Night Out

Living in Darkest Wiltshire, I don't get out much, which is probably fortunate for the rest of the world. However, last night Mr Robot and I headed off to a gig in Bristol, organised by one of the local steampunks. (I am not sure whether it should be called a steampunk event, but there were plenty of steampunks there and everyone seemed to have a jolly good time.) We stayed over in a Travelodge because the last train home would've been long before the gig ended. Anyway, I'm feeling minging this morning (mainly because of lack of sleep; I switched from beer to water after three pints) but had such an awesome time I thought I'd share it with you.

It was at The Fleece, a proper sticky-floored old venue that's hosted all sorts of acts, including Radiohead, Oasis, Nirvana and so on in their early days. I liked it because it served Doom Bar, thereby proving wrong Mr Robot's gloomy prophecy that all gig venues sell is 'crappy lager'.

First up was Tom Holder and the Railway Sleepers. I really liked them; billed as 'gypsy punk blues' there was certainly a fair bit of Django twiddling in there, but I like that sort of thing. It's great to go to a gig where the first act gets you moving straight away.

The second act, Bucucrasu, weren't my sort of thing. They were described as 'New Orleans Honky Tonk plus beatbox', and were pretty bluesy with, as you'd expect, a bloke going 'doof tchk doof' into a microphone. I don't think they were bad, just not gritty enough for me. 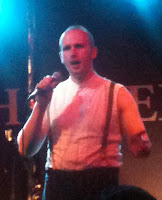 Between Bucucrasu and the next band was Sir Sydeian Strong, the Victorian strongman! He's researched the history of the Victorian fairground strongman and is recreating typical feats of strength from the time. Headline act Professor Elemental came up and did the 'barking' for the act. When Sir Sydeian explained he was going to twist a piece of metal into a shape, a voice piped up from the audience, "Make it a rude shape!". The Professor announced that now he knew he was in Bristol...

My favourite act of the night was actually the third one, The Ten Pound Suit Band. How can I describe them? Their banjo, double bass and singing style reminded me of American rural music (I'm not sure if 'hillbilly' is an insulting word), but they had two trumpets adding a mariachi or sometimes even Tijuana Brass note (and I loves me some Herb Alpert!). On top of that, their songs were fantastic mashups: opening with something sounding like a passage from an Ennio Morricone film score, they then stirred together 'Billie Jean' with 'Ghost Riders in the Sky'. The final song (?!) of the night was a countrified version of 'Jump' (House of Pain, not Van Halen) that segued through 'Rappers Delight' (played and performed by the double bassist) into 'Don't Stop Believing' and then 'Whole Lotta Love'. Seriously, you have to see this bunch live. If they play near you, see them. If they don't play near you, see them. 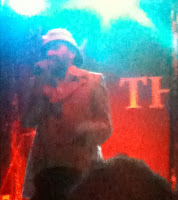 So while we'd gone to see Professor Elemental, he ended up not being my favourite act of the evening. He did perform some of his newer pieces, and several old classics, but The Ten Pound Suit Band were a hard act to follow.

All in all, a fantastic evening. I'd cheerfully do it all over again - and book the day off work the next day so I could have a lie in.

(Oh, and I went with the earrings in the end!)
Labels: events steampunk