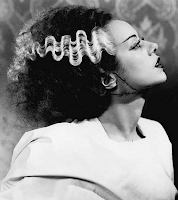 While she may not have had an extensive career in spooky movies, Elsa Lanchester had by far the most iconic role of any horror actress: the lead role in The Bride of Frankenstein. Lanchester had a bohemian upbringing in London, and worked in cabaret and nightclubs before moving to the London stage, relocating to Hollywood with her husband, Charles Laughton, in the 1930s.


In The Bride of Frankenstein Elsa Lanchester also plays Mary Shelley, but it is as the feminine monster, her hair reminiscent of an ancient Egyptian crown (and apparently based on Nefertiti, at director James Whale's request), that she is remembered. Her sharply-angled eyebrows slope back towards the lightning flashes of white in her hair, which sweeps away from a face with very delicate features. Elsa was not one of the screen's great beauties, but she made an inhumanly lovely monster.

I really do think there isn't another woman's role in horror films that has acquired such iconic status. Think of a horror character and you'll most likely think of a man: Dracula, Frankenstein's monster, The mummy… only the Bride comes close to them. Over the years she's inspired other lady monsters, my particular favourites being Sally from The Nightmare Before Christmas and the title character in Frankenhooker (note: I never claimed to have taste), but she's head and shoulders above them all.

Bloofer lady, we salute you!