Finally! The second part of my rundown of perfumes released in past decades and still available today. As with the earlier post, I've tried to note when fragrances have been reformulated heavily, but all will have been tweaked to some degree. There are a lot of Carons on here – Caron is probably my favourite old perfume house – and the list is by no means exhaustive.

Rochas Femme (1944)
I had a hard time deciding whether this should be on the list at all as it has been given an industrial grade makeover. In this case it’s been sandblasted with cumin, giving the impression of a perfectly lovely scent contaminated with curry paste.

Probably the most difficult scent on my list. It’s gone through a number of incarnations, and there’s a lot of debate about which of the recent ones is closest to the original – the current one, which I own, is supposed to be closer than some slightly older versions.

This is LEATHER. Peppery, sharp, leathery leather. Some leather perfumes smell like an old handbag, with a hint of suede mixed with face powder and other feminine things. Not Bandit. Bandit is all leather. To be honest, I’m never sure if I like it, but it’s definitely distinctive.

Jean Patou Adieu Sagesse (1946)
A modern version of this has been released; I've yet to see reports on how it compares to the original. I own a bottle of the original and find it a little challenging, though I find a lot of fragrances from this period strike me as very angular.

Caron Farnesiana (1947)
Gorgeous blend of heliotrope and mimosa. Not at all of its time, it smells more Edwardian to me, especially when smelled alongside Bandit or Miss Dior.

Christian Dior Miss Dior (1947)
Classic chypre with galbanum, oakmoss and bergamot, a green scent for a chic lady. If you can get the vintage, do – I don’t have much experience of Miss Dior, but perfumistas reckon the current version is not as good as the older ones.
EDIT 24/2/12: Miss Dior Cherie has been renamed Miss Dior now, and if you can find it, Miss Dior has been renamed Miss Dior Originale. Confused? If it's pink, it's what used to be known as Miss Dior Cherie. If it's yellowish, it's some version of the Miss Dior originally formulated in 1947.


Robert Piguet Fracas (1948)
Never one to do things by halves, Germaine Cellier, creator of Bandit, produced another fierce beauty for Piguet, this time a floral bombshell. In Nana, Emile Zola comments on how like human flesh tuberoses smell. Well, Fracas is full-on tuberose, voluptuous and glorious and possibly too much for some people. Dangerous, curvy dames, stop here!

Christian Dior Diorama (1949)
Robert Piguet Visa
Heavily reworked, I’m not sure if the current Visa counts as a reformulation or a completely new perfume under an old name (like Lanvin Rumeur). However, the current one is jolly nice, a fruity floral that manages not to smell like it should go with a tango tan and jeggings. 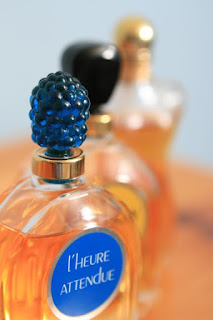 Balmain Jolie Madame (1953)
No-nonsense leather mixed with ladylike violets – I’ve seen it described as a fragrance for Emma Peel, and as Bandit’s softer, younger sister. To me there’s something of the Hitchcock blonde about it. Has been reformulated, so buy vintage if you can as the newest version is reputed to be quite toned down.

Estee Lauder Youth Dew (1953)
Rich and spicy, perhaps a little boozy in quality. Not to be confused with the modern Youth Dew Amber Nude.

Guerlain Ode (1955)
Reissued, but only for the Guerlain flagship shop on the Champs-Elysees. According to PerfumeShrine, in the Bond novels, it’s worn by the one woman Bond fell in love with. I didn't see it when I visited the boutique in September 2015, so they may have discontinued it again.

Molinard Nirmala (1955)
Has been reworked a bit. I haven’t sniffed it, but by all accounts it can be quite shouty if you put too much on.

Christian Dior Diorissimo (1956)
Lily of the Valley, Dior’s lucky flower. As with all the Dior scents, buy vintage if you can.