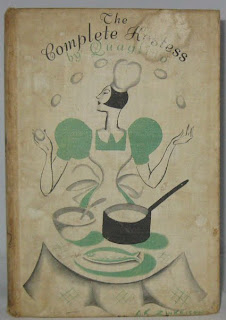 What you got cooking?
I'm doing steak and mushroom pudding. It was supposed to be steak and kidney, but Mr Robot missed the kidneys when he was emptying the rucksack yesterday, and there was no way I was going to cook with offal that had been unrefrigerated for a whole day.
I do like traditional British food. I also like foods from pretty much anywhere else you'd care to name, although the food I ate in Cuba wasn't outstanding. Apart from British, French, Indian and Spanish are probably my favourites. This book here is a little gem, The Complete Hostess by Quaglino, one of my Oxfam bookshop treasures. Quaglino's restaurant still exists in London, and they have pictures of this book on the wall in part of it, but the food was not what I had hoped for when we ate there. (Note to chef: it's polo mints that have holes in the middle. When your soufflé has a hole at the centre, it's not fit to send out…)
Quaglino's was one of the restaurants to eat at in the 1930s, and the intro to The Complete Hostess makes it plain that this is a book to give to one's cook. The ladies who bought this would not be the ones making the dishes. (Seven courses of them in the case of the dinner menus.) 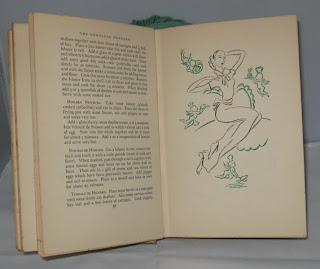 No quantities are given, you are expected to be able to judge such things for yourself, and in many cases one basic recipe is followed by variations, exchanging one ingredient for another. I've made a few of them, and enjoyed them very much, and find this book does enable me to make dishes that look and taste very special while actually being extremely simple. While Quaglino was Italian, the recipes strike me as closer to the French style, with meat and fish in sauces, and most dishes much lighter than traditional British fare. No steak and anything pudding here!
Do you like old recipe books or traditional food? Christmas is coming, the one time of year when virtually everyone takes a step into the past.
Labels: 1930s books food