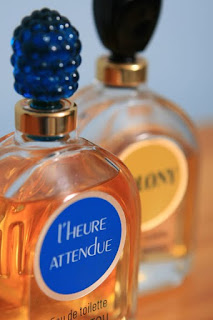 One of the things waiting under my tree this Christmas was a bottle of Jean Patou Divine Folie. Formulated in 1933, it was one of a dozen Patou scents released in the 1980s as 'Ma Collection' and then discontinued again. I already had two of the twelve, Colony, a fantastic pineapple-laden chypre, and L'Heure Attendue, a woody beauty designed in celebration of the end of the Second World War, so it is wonderful to be able to add another bottle to ma own collection. When I use them, I always feel a slight sadness because it's unlikely these fragrances will ever be released again. Modern regulations on ingredients and general stinginess in mainstream perfume manufacture will see to that. (Seriously, the liquid in the average bottle of perfume costs a few pennies to make; big firms seem ever more reluctant to use high-quality, but pricy, equivalents.)
A lot of older perfumes appeal to me much more than modern ones. I don't know if it's because with old bottles there's more likely to be a higher percentage of natural ingredients inside or simply because, like clothes of a certain era, perfumes of a particular age have a style in common, but my personal tastes definitely cover the start of the 20th century up until 1940. There's a smoothness to 1930s fragrances, like bias-cut satin in bottles. Divine Folie has a clove-like spiciness, hinting at carnation, then an underlying sweetness and warmth, and I feel very lucky to own it.

I know Mr Robot got my bottle from Rei Rien because a few days before Christmas he confessed he was going to have to try to get his money back from PayPal as the parcel hadn't turned up after a month and they weren't answering his emails. Anyway, after Paypal got involved he was finally given a tracking number and then the parcel arrived, but their customer service was dreadful. I've used Rei Rien in the past and think their stock and prices are excellent and will order from them again, despite the poor service, but if you do order from them, be prepared to wait quite a while for your parcel to arrive – and don't order if you need delivery by a set date.
Labels: 1930s perfume