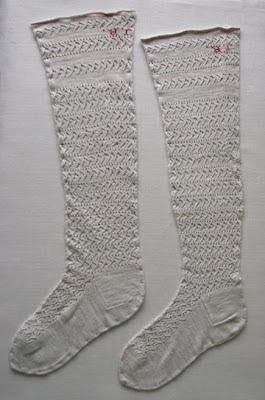 While I was in Segovia recently, I visited the town museum, and took these photos for my blog as I know a few people who read it are into textile history and thought the construction and stitch patterns might be interesting to them.

The images aren't 100% sharp, but they were taken without flash as the museum only allows photos to be taken without it. I was pretty disgusted at the number of people I saw on holiday inside historic buildings and museums ignoring the 'no flash' or 'no photos' signs. Some materials, including fabrics and pigments, corrode faster with exposure to light, and holidaymakers don't get a special pass to trash other people's heritage. It's not 'only one photo', it's only several hundred photos a day, tens of thousands of photos a year. (I'm ranting, aren't I? Well, dagnabbit, it's my blog and I'm going to rant on this one! Mr Robot and I take great care to be responsible photographers. I wish more people did. If you can't take a photo without flash, try to develop a memory a bit better than that of a goldfish so you can remember things!) 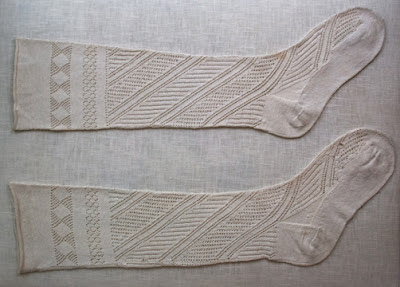 Anyway, back to the stockings. One pair was in a cabinet with a traditional Segovian woman's outfit, one with a man's one, but I couldn't work out if there was anything special about the patterns or if sock patterns are unisex there. Neither pair uses ribbing for a cuff so I'd be interested to see how they stay up! One pair has initials stitched at the top in scarlet, and the brightness of the pigment and the fact that it hasn't leaked into the surrounding fibres makes me think it might be Turkey Red.

The wool used for the stockings is very fine; Segovia was a centre for the Spanish wool trade centuries ago and the people are very proud of that history. (Merino sheep originated in Spain, and there's a fab display of old spinning equipment in the museum.) Sadly the local wool industry has died out now - it would be lovely if some enterprising Segovian decided to start a small business selling genuine Segovian wool. I'd certainly have brought some home. 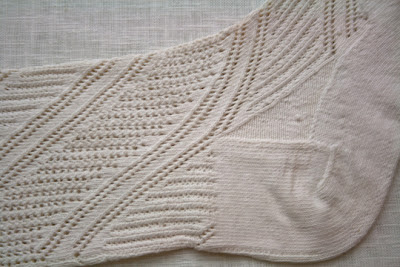