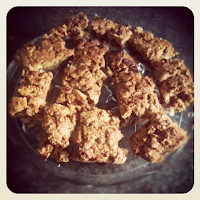 Over the weekend I had my first cake fail. This very rarely happens; I'd been watching Great British Bake Off for the first time (I know, late to that party) and was surprised when they were saying choux pastry was difficult to make as I'd made it at university with no help and no problems. This put me in a baking mood, so I dug out one of my favourite cake books, Cakes: Regional and Traditional by Julie Duff, and set to work. Pride comes before a fall, and I may have been feeling smug about my pastry, but the cake didn't work out well.


The cake I made was a Welsh Apple Cake, and apple cakes are always tricky beasties because of the extra moisture in the fruit. I added a tiny bit of milk and thought I was being stingy with the liquid, but the dough came out a bit too soft, and when I baked it it was a damp cake indeed, so I ended up having to overcook it so the edges were crunchy and the middle cooked but still very soft. Anyway, I'm pretty sure that's where I went wrong. It tasted nice, so wasn't a complete failure

If you haven't seen Cakes: Regional and Traditional, I recommend it. It's not a pretty book; in fact, there aren't even photos of every cake in my hardback version. I'd put Julie Duff somewhere between Mary Berry and Roth Goodman (of Wartime Farm). Mary Berry because like many of Mary's cake books, Julie's uses simple ingredients with a focus on flavour rather than a big pile of icing and decoration, and Ruth Goodman because to make this book Julie sifted through old recipe books – handwritten ones kept by cooks and housewives as well as published ones – to come up with a really good collection of authentic recipes from around the UK, and relates the history of each recipe alongside the instructions.

You do get a really good idea of what ingredients came into the various regions. Some ingredients were loved nationwide (such as ginger, or caraway seed) while others were very regional, such as Saffron Cake from Cornwall or Irish cakes using potatoes as a starch. Some cakes were made mainly for saint's days or funerals, others for fairs. Often you'll see the same idea done differently in different parts of the UK and Ireland, with local tweaks to each one. Mr Robot is expecially fond of the Irish Lemon Cake recipe. I will be attempting other cakes from the book - in fact, I'm going to have another go at that dratted Welsh Apple Cake, because I've never been beaten by a baking goal yet...
Labels: food Wales