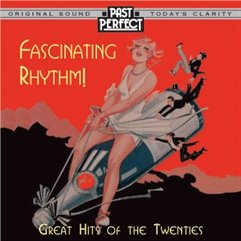 This CD is a compilation that I bought in Past Times years ago and is now available as a CD or download from the manufacturer, Past Perfect. It’s great as a taster for 1920s popular music because it’s entirely made up of hits from the decade but is quite varied nonetheless. You’ve got fast, dance-friendly, instrumentals such as ‘Turkish Towel’ by the Savoy Havana Band and ‘The Charleston’ by the Savoy Orpheans, and perky songs such as ‘Button Up Your Overcoat’ by Jack Hylton and his Orchestra and ‘Five Foot Two, Eyes of Blue’ by the Savoy Orpheans. Duke Ellington’s ‘Harlem Twist’, with its marvellously dirty trumpet, is one of my favourite tracks.

There are some very big names indeed included on this disc, from the aforementioned Duke Ellington to Paul Whiteman, Louis Armstrong and the Charleston Chasers. The last of these existed purely as a recording outfit, not a performing band. Some of major performers of the 20s and 30s did stints in the Chasers including Jack Teagarden, Benny Goodman, Glenn Miller and Jimmy Dorsey. (There’s a modern band called the Charleston Chasers, but they’re unconnected to the 1920s recording outfit.)

The one thing I do think is lacking from this CD is a female voice. A lot of the 1920s music I’ve got with female singers does tend to be less densely arranged, sometimes with nothing more than a piano for backing, and the tracks on this CD are all played by groups of musicians so there would be some jarring. However, something by Ruth Etting or Annette Hanshaw would have slotted in nicely. Nonetheless, you do get a good feel for the popular music of the decade from ‘Fascinating Rhythm’, and I’d definitely recommend it as a purchase if you’re getting interested in the 1920s and aren’t sure where to start listening.

Note: I’ll issue a mild of-its-time warning for terms for non-Caucasians in one song, ‘Let’s Do It’ (Arthur Rosebery and his Kit-Cat Dance Band).