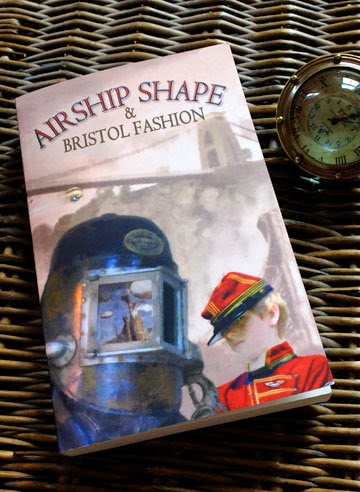 Bristol was recently said to be the best city to live in in the UK. Having only ever lived in one city - I'm a town mouse - I'm not qualified to comment, but I do know that I really enjoy visiting Bristol. The place has spirit, a colourful anarchic independence, a unique creativity... So it's no surprise that this book of Bristol-based steampunk short stories exists. It was produced in association with the BristolCon Foundation, money generated by one-day science fiction convention BristolCon being used to support and encourage grassroots SF.

I knew about the book because one of the stories written in it is by one of my friends. One of the other writers, cover artist Andy Bigwood, had a stall at a recent open day at Trowbridge Town Hall (now an arts centre) and I bought my copy there. At £12 it wasn't cheap, but I like to support local(ish) things.

Now, I review SF professionally, so I usually shy away from reading things written by friends because I always worry there may be a time when I have either to lie or to upset someone I like. I've also had to read a fair few ropy short stories in my time - though the fact that this book is written by new authors actually works to its advantage; while established writers often seem to write vignettes featuring established characters instead of proper stories, most of the stories in this volume do have proper beginnings, plots and endings. Two did feel like the first parts of novels ('Flight of Daedalus' by Piotr Swietlik and 'Lord Craddock: Ascension' by Stephen Blake) which I found irritating, but you might not mind the open ends so much.

My favourite stories were 'Brassworth' by Christine Morgan - an entertaining tale of a Bertie Wooster-like character and his robotic valet - 'The Lanterns of Death Affair' by Andy Bigwood - a ripping boy's own adventure featuring young airship sailors - and 'Something in the Water' by Cheryl Morgan - Bristol, steampunk and the Cthulhu mythos! (It wouldn't be fair for me to include 'Miss Butler and the Handlander Process' by John Hawkes-Reed on the list as he's my friend, though I very much enjoyed that one too.) I don't think any of the other stories in the volume are worse than those, but I like Jeeves and Wooster, Cthulhu mythos stories and tales of derring-do, and dislike too much overlap with urban fantasy in my steampunk (vampires? HELL NO!), so the stories I've listed are more naturally my sort of thing.

One thing all the stories have in common is a good, focussed engagement with Bristol and its history, including its role as a slave port, and a city which was home to prominent pro-emancipation campaigners. Many characters have African heritage. Steampunk is often criticised for not engaging enough with the reality of 19th century history, with slavery and Empire, with the treatment of women and the working classes. These things are not ignored in this volume.

All in all, if I'd bought this without knowing one of the writers, I'd still be really pleased I'd bought it. Yes, £12 is pricy, but I very much enjoyed reading the whole thing. Here's hoping the BristolCon Foundation is able to support more books by local writers.
Labels: books Bristol science fiction steampunk