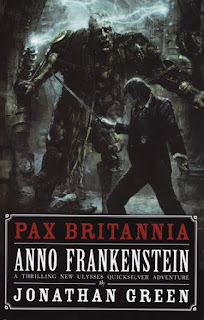 I admit it, was was predisposed not to like this book for the most shallow of reasons: its title reminded me too much of one of my favourite novels, Anno Dracula by Kim Newman. On a superficial level the two do have things in common: a twentieth century wartime setting, a character from gothic fiction having an effect on that setting, a ripping yarn. The two really are very different, though.

Anno Frankenstein is the seventh Ulysses Quicksilver adventure Green has written for Abaddon Books' steampunk Pax Britannia series. (I've also reviewed Blood Royal and Dark Side, the two immediately preceding this one.) Despite my early misgivings, it is my favourite in the series so far.

Dark Side ended with Ulysses following his nemesis, Daniel Dashwood, into the time vortex. In Anno Frankenstein the story picks up back in the 1940s. Steampunk novels vary in their adherence to history and exploration of actual possibilities, and Green's books have always been strongly on the side of fun rather than realism. However, I was impressed with how Green created a Second World War situation that fitted into the world of Magna Britannia without making it simply a redone version of real history with some cogs stuck on. That said, if the Victorian aspect of steampunk was weak in Dark Side, it's virtually non-existent here. There's reference to Babbage engines and airships, and when Magna Britannia enters the war close to the end there are automata and steam-powered war machines, but before that things definitely feel closer to the actual 1940s than to the steampunk late 20th century of the other books. This is a fictional world; perhaps in Green's world Victorian styles only continued in the places where Victoria herself endured as ruler. If you can't go without your cogs and coal that might disappoint you. I thought the story was strong enough that the lack of Victorian ornament didn't bother me.

Despite being a Ulysses Quicksilver book, you'll have read halfway through the novel before he enters the story; a great deal of this one is more about his father, Hercules. While Ulysses is keen to stop Dashwood changing history, Hercules has his own mission, delivering a secret weapon to the castle where the Nazis' Frankenstein Corps monsters are being created.

I don't know if having a new main character and a new setting gave Green more freedom, but there's certainly a lightness of touch and a bounce in this one that the book immediately before it lacked. He certainly has fun dropping in little likenesses and references to other science fiction and fantasy works – without mentioning any of the major ones, I did smile at a 'Commander Riker'. (You do know your Star Trek, right?)

This book is one you could easily read without having read any of the others in the series; while there are references to events in the other stories, it's not critical to the plot that you know any of them. And if you like foolish but fun adventure stories, I recommend it.