The Victoria Vanishes: the pub crawl 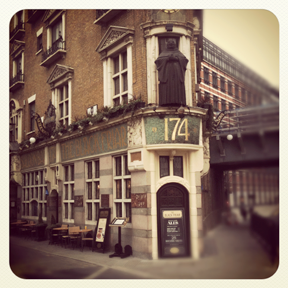 Not so much a crawl, more a bijou crawlette.

I got a copy of Christopher Fowler's novel The Victoria Vanishes for Christmas. (Review here.) I loved the pubs in the novel, which are both settings for the murders and clues to the identity of the killer. When Mr Robot and I decided to spend a long weekend in London, visiting some of the pubs featured in the book seemed a good plan. Now, I'm not normally this cheeky, but as Mr Fowler commented on my review, I tweeted him to see if he had any in particular to recommend, and he was kind enough to reply. He recommended four within easy walking distance of each other. 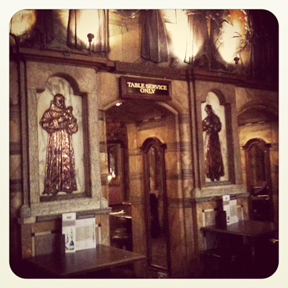 Pub 1: The Black Friar, 174 Queen Victoria Street
Turn right out of Blackfriars tube station and this is what you see. Pretty, isn't it, narrow and wedge-shaped with turn-of-the-century mosaics on the outside? Nothing will prepare you for the interior. I took my photos on my iPhone – the big camera doesn't come boozing – and they really don't do it justice. The pub is grade II listed, thanks to the astonishing Arts & Crafts marble interior. The jolly monks shown on the walls, and all the marble, give it a slightly churchy feel, but the beer is excellent and after a pint you will feel at home with the brothers. 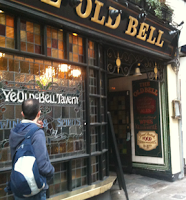 Pub 2: The Old Bell, Fleet Street
The same company that owns the Black Friar also owns The Old Bell, yet this one has none of the atmosphere of the other. It was built by Sir Christopher Wren to house his masons rebuilding St Bride's Church behind it. (I made sure I took a look at St Brides as John Milton, THE POET, used to worship there.)

As far as I can tell, The Old Bell did not get gutted during the Blitz, although St Bride's did, but it still feels as though the interior has been redone too many times over the decades. Perhaps in the days when it was the haunt of journos and printers they brought plenty of colour to the place, but it is somewhat lacking in personality now.

Diversion: Ye Olde Cheshire Cheese, Fleet Street
Not in the book, and so I will not review it here! But good fun, with its little nooks and cubbyholes. 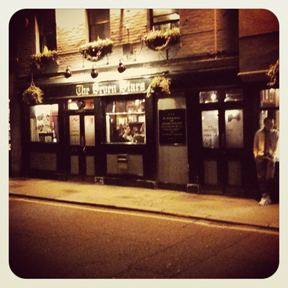 Pub 3: The Seven Stars, 53 Carey Street
This is one we'd never have found without being told it was there. It's behind the Royal Courts of Justice, on a street you'd be unlikely to wander along by chance. possibly the oldest pub in London, The Seven Stars is one of the few buildings to survive the Great Fire, and it lasted through the Blitz too. It has a standard-sized front, but is only one room deep, and is covered with posters promoting legal-themed films and photographs.

The Seven Stars somehow felt quite continental to me. Perhaps that was because of the posters and photos, or the shiny oilcloth on the tables. We thought the menus looked pretty good here, although we had already eaten so didn't stop for food (I've since learned that the owner has written a cookbook, so the place probably does do top nosh). 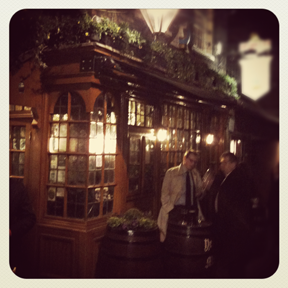 Pub 4: Ye Olde Mitre, Ely Place
Even if you know where this one is supposed to be, it might take you a while to find it as it's hidden away down an alley. The site was originally on land belonging to the Bishop of Ely, and so was legally Cambridgeshire. If you're a bit naughty nowadays, though, the London bobbies can come and take you away from here... Ye Olde Mitre doesn't open at weekends, and we delayed our pub crawl until the Monday to fit it in. It was very busy when we got there; my overwhelming impression of the inside is of dark wood and a good atmosphere, but we drank outside so I can't say for certain!

If you get the chance to drink in a historic pub, wherever you are, do take it. So many are being converted nowadays, and these are our history, as much a part of the lives of ordinary people as palaces are of the lives of kings. Don't let your history be turned into flats!
Labels: 1900s drink London travel