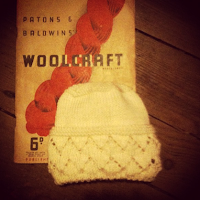 Here's one I made earlier! Apols for the rubbish photo. I've been quite quiet lately. Often I don't blog about stuff I'm working on because it's for work and therefore commercially sensitive (I've a bundle of stuff on the go for SFX right now that's the sort of thing I'd usually talk about on this blog) or because it's for a swap and I don't want to spoil things for my partner.

Anyway, this little hat is one of the things in the latest parcel I've sent, for the Vintage & Kitsch swap in Odd Ducks on Ravelry. The parcel's been in the post for well over a week, so I reckon given its destination it'll be another week or so before it reaches my swappee, and I haven't noticed any traffic from Ravelry to the blog, so it should be safe to post a pic (and I'm not posting pics of the big things in the box). My swappee is having a baby, and after tracking her very carefully to ensure she wasn't superstitious about getting baby knits in advance – some people believe it's unlucky – I knitted this lovely little hat in pure Merino wool. It's seamed, and while I wanted to keep things authentic, I'm not sure a hat like this needs a seam, so if I did another one in future I'd do it in the round and take out the seam stitch. Some people hate all seams, but I think they're very useful for giving structure and stability to some garments, you just don't need them in a baby hat. (And seams have NO PLACE in socks, but that's another topic!)

Because of the address in the book and the company names, it's got to be post 1920, when Patons and Baldwins merged, but pre-1951 when the headquarters was moved from Halifax. A quick look around the internet suggests to me that it's 1930s as the version of Woolcraft from the 1940s, which was adapted to take account of wartime Authorised Economy Standards, had a blue skein of yarn on the front and cost ninepence.
Labels: 1930s knitting