The Wonders of Mechanical Ingenuity 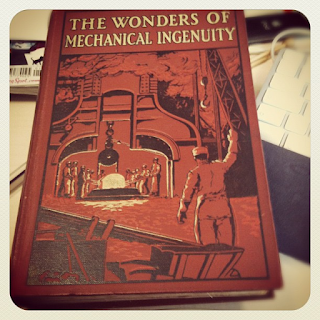 I had the urge to go to the Oxfam bookshop today. I don't know why, the place was calling me. I headed straight for my usual section, Crime, but there wasn't anything to satisfy my shopping itch there. (Well, I picked up a couple of Ian Flemings, but nothing really exciting – no new Freeman Wills Croft or anything like that.) So I poked around a bit more, looked at the design books, and then in the back of the shop I found this! I had to buy it for the cover alone. There's a bookplate in the front saying it was Third Prize to a schoolboy named Arthur Fudge (splendid!) in 1913, which dates it nicely.

I don't think this is my book, though. I think it is actually my friend Andy's book. (He's one of the organisers of Waltz on the Wye, and full tickets including the ball have nearly sold out, so if you want to go, book now!) As soon as I saw it I thought it would appeal to him. But if you're reading this, Andy, you'll have to wait until May to read it, muahahaha! And it has walking steam engines and talks of steam-powered lifeboats and everything.
Labels: 1910s books shopping