The Rocketeer: The Complete Adventures [comic] 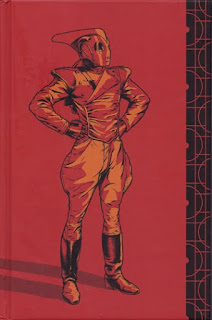 Films made from comics are usually inferior to the source material, in my experience. I love the 1991 film The Rocketeer, and have been keen to read the comics for some time. I bought this collected version (hardback) from Amazon recently. The original comics were published in the 1980s and would be pricy to get hold of; a hardback reprint is much more affordable.

If you’ve seen the film, it’s very strongly based on the first Rocketeer story, where Cliff Secord comes into possession of the stolen rocket pack, and his mechanic Peevy puts together a finned helmet for him so he can steer in the air. Both German spies and the FBI are keen to recover it. There’s a second story in this volume, set in New York, where Cliff falls in with a Shadow-like character, and that had no real influence on the film that I could see.

The only really dramatic difference between the film and the comic is the portrayal of Cliff’s girlfriend. Dave Stevens based the Betty of the comic on Bettie Page - in fact, it’s one of the things credited with leading to a revival of interest in Bettie, and the two became friends. Betty is an incredibly sexy starlet who’s involved with a Hollywood photographer as well as Cliff, and Dave Stevens’ depictions of her really pay homage to vintage pin-up art. However, for something set in the late 1930s she really is anachronistic, and I do prefer Jenny Blake, Cliff’s girlfriend in the film, as portrayed by Jennifer Connelly, who looks right for the era.

At the start and end of the stories the book contains reproductions of the issue covers and full-page adverts for The Rocketeer comics, and in most cases they have the feel of art deco posters, just as the film has a beautifully deco feel. While the storyline in the comics is set in the 1930s, the visuals don’t always reflect that. Overall, while I’m glad I own this book, this is one of those rare instances where I prefer the film to the source material.
Image: the hard cover of the book, which I like better than the dustjacket.
Labels: 1930s 1980s comics