Vintage camera: in Bath with the Voigtlaender Bessa 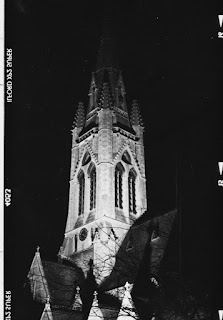 Mr Robot and I took his 1930s Voigtlaender Bessa out in Bath on Tuesday night. (Basically, Mr Robot handles the camera because he knows his f-stops from his apertures, while I keep track of photos taken and wrangle the rest of the kit.) We'd been meaning to take it out for a while, so had ordered some 120 film that we wouldn't need to develop ourselves but would go through a standard developing machine.

Now, this was the Bessa's first proper outing, and one thing we realised rather late on is that the shutter was slightly sticky. We're pretty sure there won't be any internal rust – the camera's about 80 years old yet has no external rust – so we've been debating whether to use some WD-40 on it. As there's a risk of getting WD-40 on the lens (which is what happened to the 1950s Dacora 1) we'd rather work with it as it is for now. The upshot of it is that a lot of the photos were overexposed.

We haven't done any proper prints yet. Finding someone who could develop the firms was a trial. While the Ilford XP2 Super that we used will go through a machine, very few places actually have a machine large enough. After visting three places, the fourth, on the corner near Blacks and M&S, was able to do it. They couldn't do prints though. The photos you see here have been produced by scanning the negatives and then a bit of Photoshop trickery with the light levels, so it'll be interesting to see what results we get when we crack open the chemicals and make prints. 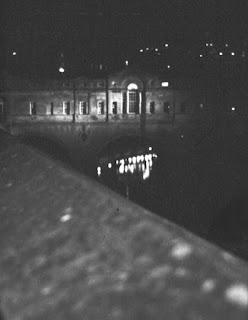 The difficulty of getting 1-hour developing means we're not going to be able to use the Bessa at Waltz on the Wye as planned. We did consider developing the films ourselves and making contact sheets for people to see while there, but even if we can black out the hotel bathroom, we doubt they'll be happy with us turning the place into a chemistry lab... Still, good to give the old thing its first outing, and we're both looking forward to getting better images out of it in future. Onwards into the past, people!