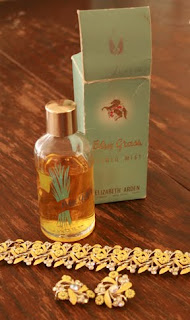 I've been silent for a few days as we've been in That London. We got back today and I had to go and buy food (poor Mr Robot had to go into the office), so took a leisurely stroll round the local charity shops at the same time. I didn't find anything in those, but came up trumps in the house clearance place.


I got this bottle of Elizabeth Arden Blue Grass Flower Mist for £5 and the bracelet and earrings for £19. That's a high-ish price for me to pay as I am a skinflint, but Steptoes are selling a later, 15cc bottle of the same scent for £12.50 and a 25cc bottle for £16.50. I'd estimate there's about 70cc remaining in my 95cc bottle, so it looks like I've netted a bargain. It smells absolutely lovely. I did wonder if it and the jewellery belonged to the same person – if so, she must have been a very chic lady.

Now, the bracelet and earrings. As I said, they cost a bit more than I'd usually pay, but they are just so pretty, and they are a matching set. (I know lots of people into vintage seem to know of magical places where deadstock dresses go for peanuts and there are crates of vintage Coro, but can I find them? No!) Compared to what similar things are going for online, it's a fairly good price. 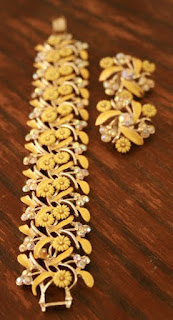 One of the daisies on one clip-on earring is missing a petal, and there's one whole daisy missing near the clasp of the bracelet, as you can see at the bottom the photo, but as far as I can make out that's all that's wrong with it. All the stones are intact, and the enamel is too. I might see if I can have a go at recreating a replacement daisy in Fimo - at worst, it won't work and I won't attach it, and there's so much going on in the bracelet that you don't notice the missing daisy when it's on anyway. They're unsigned, but I feel they have a late 1950s, possibly early 1960s look. What do you think?
Labels: 1950s 1960s jewellery perfume