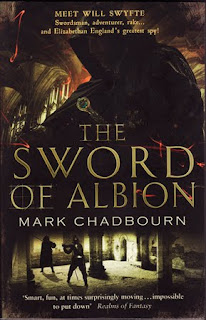 The 1500s may be rather earlier than everything else on this site, but as Mark Chadbourne's novel Sword of Albion is a superbly satisfying tale of derring-do AND a bit of an alternate reality tale, I reckon it's good to review here. I have a real fondness for tales of swashbuckling chaps doing adventurous work, and this one has fantasy elements mixed in too.

During the reign of Elizabeth I, Will Swyfte is one of Francis Walsingham's spies. Walsingham was, in real life, Elizabeth's sypmaster (played in a rather phwoarful fashion by Geoffrey Rush in the film Elizabeth, I fondly recall). However, unknown to most of the people in England, what they are actually fighting is the Unseelie Court, who John Dee (another real historical figure, the Queen's astrologer) has managed to drive out of England. Now the fairies are using the Spanish to fight back, starting by recapturing a secret weapon hidden deep in the Tower of London. At this point you're probably thinking either, 'GREAT!' or 'What a load of bollocks'. If you're of the latter frame of mind, this really isn't a book for you.

I bought this book for my holiday to Seville, started it there but didn't finish it. I wish I had, because at one point our dashing heroes end up in Seville! One thing I appreciated greatly is that neither the Spaniards nor the Scots are portrayed as bad people; in fact the principal Spanish character, Don Alanzo, is shown to be a man of courtesy and skill, and James V of Scotland (later I of England) is depicted as an intelligent and witty man. Moreover, Will uncovers truths he really doesn't like about his own countrymen. As much as I love tales of derring-do, the unbridled nationalism of some early 20th century ones does grate on me, so it's nice to get a volume that's stuffed with swordfights and chases yet doesn't label any one group of humans as 'bad'.