The A-Z of Crinoline Robot 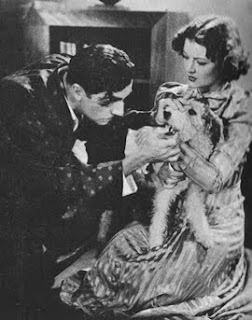 I nicked the idea from Retro Chick, but felt the subjects were possibly not right for this blog, so here is an A-Z that sums up this blog pretty well!

Apple, my body type. You’ll see me mention it a lot in relation to my wardrobe.

Brooches. My new year’s resolution for 2011 was to buy more brooches. You can pick them up cheaply and they add a nice vintage touch to any outfit.
Crime. I read a lot of crime novels. Dorothy L Sayers and Agatha Christie are probably my favourites, but I also have a lot of affection for Freeman Wills Crofts and Mignon Eberhart.
Derring-do. Bulldog Drummond annoys me, but I have plenty of time for Dick Barton, Special Agent, and for Paul Temple and his sparkling wife Steve.
Events. I’m a recluse, but every once in a while I go and do something. It probably won’t be the same sort of thing you see on most vintage blogs, but variety is the spice of life...
Film. I love silents with live accompaniment, and black-and-white on the big screen in a darkened, old cinema. You can keep your modern multiplexes. I also have a great affection for old horror films, especially Universal ones from the 1930s and Hammer from the 1960s.
Goth. I used to be one, I just don’t interact with the subculture any more. Still love my old albums, though, and you can’t beat a good black dress.
Hairdo. In my case, hairdon’t. Unlike most fans of 20th century things I never do anything with mine. Sometimes I fantasise about shaving it all off and buying a set of impeccably styled wigs.
Icons. My style icons are Morticia Addams, Helena Bonham Carter, Myrna Loy and Colleen Moore. Sadly, I resemble none of them.
Jazz Age. My favourite era is probably mid-20s to mid-30s, just to confuse people who like to go by decade.

Knitting. I love knitting; it enables me to make some of the clothes I want in the colours and sizes I want. A lot of people wish they could knit - if you’re one of them, you can. I didn’t learn until I was 30.
Life. Don’t talk to me about life.
Mitsouko, queen of perfumes.
Noir. Give me Chandler. Give me Hammett. Give me Mickey Spillane (but only if there’s nothing else on offer). And serve it up with side dishes of Powell and Loy, Bogart and Bacall or Ladd and Lake.
Offensive. I try to flag up when people might find things from books or films I’m reviewing offensive. Some things were commonplace in days gone by. You might not want to deal with them nowadays when reading a novel or watching a film for fun.
Pulp. Doc Savage, the Shadow and many more. I like my thrills fast and my spills savage.
Queenie. Mr Robot says I am like Queenie from Blackadder II. To which I say, WHERE’S MY PRESENT?
Repro. Being a chunky sort of lady with a thick waist, repro is my friend, especially when I can get it custom-made to fit.
Steampunk. I’m not a steampunk (possibly I come closer to dieselpunk), but as with goth I have friends who are, and I dabble on the fringes. Just call me a cog-hag.
Tea. I get very annoyed with people who can’t tell the difference between afternoon tea (posh) and high tea (substantial, rustic). HIGH TEA IS NOT FANCY.
Underwear. If you’re dressing from an era when foundation garments were firm, you need a firm foundation too.

Vintage. To me that means stuff that’s at least 50 years old, not something with shabby chic roses plastered all over it. If it’s not old enough, it’s not vintage, end of story.
Wine. It doesn’t have to be vintage.
X-rated. Some blogs are, this one isn’t, although I may discuss knickers from time to time.
You. This blog is about things I like, but if you’re here, I hope it’s about things you like too.
Zeppelin. I’m still not steampunk, mind you.
Labels: robot data