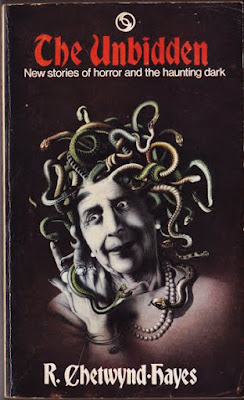 This post is prompted by rewatching The Monster Club, a very early (and incredibly low budget) 1980s portmanteau horror film. (Portmanteau films are ones made up of several stories interlinked by some sort of narrative, and I've only come across them in horror films. You could call The Simpsons annual Halloween 'Treehouse of Horror' episodes portmanteau episodes.)

The Monster Club is based on the short stories of Ronald Chetwynd-Hayes. You may well not have heard of him, even though among his awards was the Bram Stoker Award for lifetime achievement and when he passed away it was regarded as significant enough for papers like The Telegraph and The Independent to run obituaries for him. You're probably thinking, 'Oh no, she's going on about some other obscure writer again'. Well, yes, I am, but he's worth it.

The thing I really love about Chetwynd Hayes' stories is that they're so British, in the same way that Hammer films at their very best can be, a strange suburban ghoulishness mixed with a wry sense of humour. (This might also account for the stories' lack of popularity outside the UK.) Grasping spouses kill their rich husbands or wives (who then refuse to stay dead, an embarrassing family trait they'd neglected to mention). Lonely spinsters turn young men into kittens over plates of home-made cake, and lower-middle-class families keep a ghoul in the attic or a vampire in the cellar and try not to let the neighbours find out. Tea flows, and sandwiches are served. Chetwynd-Hayes' great innovation, though, was his stories about monster marriages. Ever wondered what happens if a vampire marries a werewolf and has children? Or how the offspring of a ghoul and human might turn out? These make up some of his most bizarre and entertaining tales.

While horror anthologies seem to be making a comeback, the rise of the urban fantasy and paranormal romance subgenres have had an effect on the modern short horror story, and I'm not sure if there's as much of a market nowadays for stories like those of Chetwynd-Hayes. Nowadays people seem less interested in creepy twists, more interested in vignettes about established characters. One thing I'd love to see is a television series set in a Chetwynd-Hayes environment; the only person or group of writers I can imagine doing it justice is Mark Gatiss and the rest of the League of Gentlemen team. If I wrote to Mr Gatiss about it, I wonder if he'd read the letter...
Labels: 1960s 1970s 1980s books horror