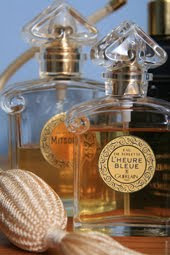 The modern interpretation of vintage can be a bit twee, all roses, peter pan collars and cutesy jewellery. You can generally weed out the twee from the not-twee with vintage perfume. To modern noses, a lot of vintage fragrances are difficult to love. In the 1990s, the powerhouse scents of the 80s (Poison, Giorgio and their ilk) gave way to ozonic scents, and the noughties have seen the rise of the fruity floral and gourmand scents, incredibly sweet and often very linear. Confront someone into twee-vintage with a scent devised 60 years ago and the best comment you can hope for is 'old lady'; people will actually recoil from a bottle of Bandit. (It is worth noting at this point that most scents have been reformulated over the decades, and modern formulations have often been tweaked not just to keep in line with current regulations on ingredients, but to be a little more in keeping with current fashion. Some have been more tweaked, some less, but virtually all have changed a bit.)

Mitsouko, from Guerlain, is one of the most difficult, beautiful fragrances you can buy. Luca Turin and Tania Sanchez, authors of Perfumes: The Guide, cite it as their favourite scent. One of the bloggers on Perfume Posse (I think it may have been Patty) wrote: "Mitsouko is Mitsouko. You either worship The Queen or you don’t." Jean Harlow wore it, and before her husband killed himself, he doused himself in her Mitsouko. In Belle du Jour, before setting off to work in a brothel, Catherine Deneuve smashes a huge bottle of the stuff. Before I knew any of this, back in my student days about 15 years ago, I read an article in Vogue by Roja Dove on 'dark' scents. I was intrigued. Mr Robot bought me a bottle of Mitsouko for Christmas and a love affair began. (With the perfume; I'd been with Mr Robot a couple of years by that point).

First made in 1919, it's a classic old-style chypre, and is said to mark the era after the First World War just as L'Heure Bleu, with which it shares a bottle shape (as you can see in the photo), marked the end of the pre-war society. This is the scent of the start of the Jazz Age. Nowadays the term 'chypre' seems to get slapped on anything woody or containing patchouli, but the traditional ones had an oakmossy base and bergamot in the top. Mitsouko has a heart of jasmine, rose and lashings of peach. It's strong, but not overpowering, and is quite complex. To my mind it has something of the smell of old books about it, which is fitting as it is a challenging scent, not always easy to love but very difficult to let go of.

Like all old scents, Mitsy has had some reworking over the years, and her current incarnation is not her best. For one thing, oakmoss, with its damp, thick odour, has been replaced with the drier-smelling treemoss. If you can only get the current formulation, the Eau de Parfum is definitely the best option. The Eau de Cologne is not nice at all. I use my bottle as shoe deodorant!

Helg over at PerfumeShrine has done a wonderful review of Mitsouko.
Photo taken by, and copyright to, Mr Robot.
Labels: 1910s perfume