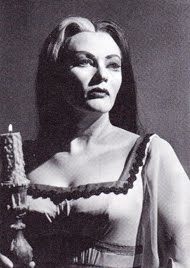 “You think you're the only one who works hard? How would you like to have to clean nine rooms and a dungeon every day?”

Lily Munster is such a well-known character it’s easy to forget that behind her was a beautiful actress, Yvonne de Carlo. And before you comment to tell me what a hottie Lily Munster was, I know she was! But nowadays de Carlo’s starlet days have been largely overshadowed by her most famous role. Back in the war years she was quite the Forces pin-up.

Yvonne’s first acting roles were in the 1940s, in films like Salome, She Danced and Criss Cross. Her biggest role came in 1956, as Sephora in The Ten Commandments. She never seemed to get roles that would take her further, though. In 1964 she signed up to play ghoulishly beautiful matriarch Lily in television series The Munsters, and although it only lasted a couple of series, it’s the part she’s best remembered for. She kept on making films after that, and also took character roles. Some of her later films could be described as B-movies, but I love a dodgy film, so that's no come-down in my book.

I have to admit, I much prefer The Addams Family to The Munsters. It’s generally more subversive: whereas the Munsters are just like ‘normal’ families in many ways, the Addamses definitely are not, and make no apologies for it. That said, I do love Yvonne as Lily. She didn’t get as many comedy lines as Grandpa and Herman, but she did often have the sweetness of a 1950s TV ‘mom’ – all wrapped up in a gloriously non-1950s-mum’s shroud-like dress.

I do have a Lily Munster doll made in the early noughties and was quite startled that her dress was pink. Loving the old black-and-white programmes, I'd never pictured her in that colour.

Bloofer bombshell, we salute you!