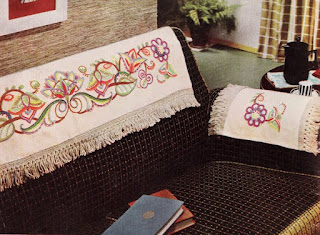 During the reign of James I & V, a new embroidery became fashionable, based on patterns on textiles from the middle and far East. It's a style of embroidery, not a hard-and-fast technique. The design is usually fluid, while still strongly structured, and is mostly of stylised plants, although animals and landscapes to creep in. It uses many different stitches and is very colourful. The style became popular again in the second quarter of the twentieth century.
I'm not 100% certain when Jacobean embroidery started to become really popular in the twentieth century, but publications about it were definitely starting to come out in the 1930s. I have patterns for it in my Stitchcrafts from the late 1940s and many more well into the 1950s, tailing off in the 1960s and 1970s. This would fit in with what I have observed of embroidery trends in the twentieth century, with more delicate work popular in the 1930s, bolder shapes and colours (and designs quicker to execute) becoming more common in the 1950s and very strong colours and more angular shapes done in thick yarns popular in the 1960s and 1970s. 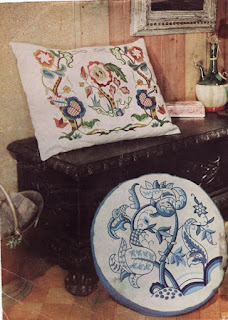 In the war years yarns were rationed, but darning wool was not, and as Jacobean embroidery does not require a great deal of yarn in any one colour AND can be done well in wool, it would be a good style to adopt during those days of shortages. I suspect its popularity in the 1950s may have had something to do with the general feeling that the British were now 'New Elizabethans', although that is pure speculation on my part.
The style seems to have been applied mainly to soft furnishings – cushions and chair backs, fire screens and curtain tie-backs, but not often to tablecloths or dinner mats, nor to clothing. It would suit a mid-century home very well. 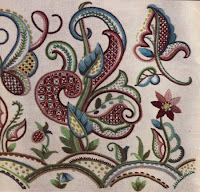