After being about the only person who didn't have a great time on Thursday night (which, if I think about it sensibly, is bloody great, because it means everyone else had splendid fun, so that's a whole room of fun) I've been feeling a bit flat. Crabby old killjoy, that's how I felt, can't have fun with anything, not even vintage, out of step with the rest of the world. But lo! Yesterday I went to the post office to collect a parcel, a vintage wrap dress I ordered from erachel on Etsy. Isn't it cute? those little pink spots are raspberries. The weather is probably too cold for it right now, but it's a plus size and I liked the print, so I snapped it up. (Thank you, zombies*, thank you for my dress.)

Mr Robot wasn't really in the mood for taking photos and so didn't point out that my hair was a mess. He also managed to cut the ruffles off the bottom of the photo! The hem of the dress sits roughly level with the bottom of my knees, and above the hem are three bands of gathered fabric, so it's got three tiers of double ruffles. As you can see, instead of the usual fabric ties it's got a pink fabric cord. Because of the length I'm not sure if it's late 50s or early 60s, although the darker colours and lack of pockets lead me to guess it's 60s but it's pretty, whatever it is.
I have a confession: I never used to like pink very much. However, this dress and my Heyday Fleur black roses are making me wish I had a pink cardi. Hmm. Black would definitely be more sensible! 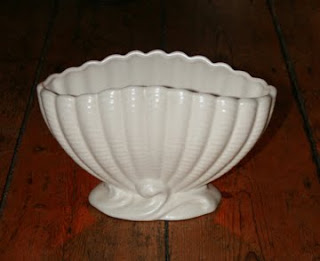 Then on the way back to the car, we dropped into a house clearance place that sometimes has vintage knitting patterns and I spotted this vase. I'd been looking for this sort of thing (large, vaguely deco, not too glossy) for the dining room, and although I'd been hoping to find something green, I liked this white shell shape. £3. I got it home, looked it up on the internet and it's SylvaC, mould 513. Although the base stamp is really unclear, that makes me suspect it's most likely to be genuine as a fake would probably have a sharper base stamp. It doesn't really matter if it is fake, I bought it because I liked it and for £3 it's an absolute steal.

So things aren't as awful as I was thinking, and with bargains like this coming my way I must be doing something right, even if it isn't the same as everyone else.

*I review books freelance. Lately I've been up to my ears in zombies. The undead are buying my winter wardrobe.
Labels: 1950s 1960s clothing homewares shopping