It seems like ages since I've done a costume breakdown for a telly programme, but the outfits in the first Partners in Crime story were so striking that I really wanted to. I really wasn't sure how I felt about the show after the first episode, nor did I like Tuppence's hats. Well, three episodes in, with the first story complete, I like the show and have come to accept the titfers.

Tuppence
You can't really avoid looking at the hats. In the first episode, I was particularly startled by Tuppence pairing a chestnut hat with a black bag and chocolate gloves. That's the point, I guess: Tuppence's hats are supposed to be over-the-top and frivolous.

Where Tuppence really rocks is her suits and knitwear. Actress Jessica Raine has an amazing figure, and the neat little pencil skirts on her suits really show that off. I do sometimes wish ladies' suits would come back into fashion. They're so chic. Just look at the two-tone collar of the one Tuppence wore on the train. You don't see details like that on suits any more, even at the 'top end of the high street' shops like Hobbs. The pencil skirts, on the other hand, would be easy to imitate. I was really pleased to see her Prince of Wales check skirt – can't wait for autumn now, as I can dig mine out and show my Tuppence. 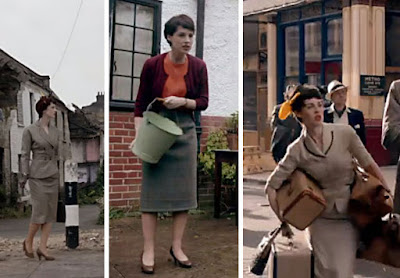 Anyway, the knitwear all appears to be fine gauge with 3/4 sleeves and, when it has a texture, to be very subtle. Dare I say it, it mostly looks machine made rather than handknitted, but then the Beresfords are a bit posh and I can't imagine Tuppence knitting. There's loads of this sort of thing on the market nowadays, from Boden's luxurious cashmere jobbies to ones from firms like Collectif. Again, it would be a really easy thing to copy. 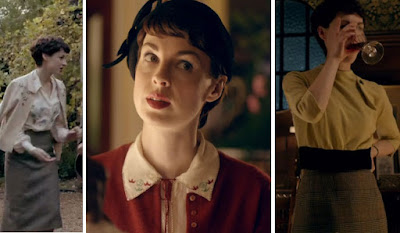 In a nice change from most period-set dramas, where you feel most of the wardrobe effort goes into eveningwear, Tuppence's casualwear is also very stylish, which is lovely and could be easily copied and worn nowadays. My absolute favourite outfit was the grey tartan swing coat worn with yellow beret and cardigan. As you can see here, the blouse is heavily embroidered and there's a very delicate stitch pattern in the cardigan too. I think what makes it is the colour matching, which turns the whole lot from a collection of clothes into a proper outfit. That's possibly why I have a problem with so many of the other hats; instead of pulling an outfit together, they take the edge off her looks. 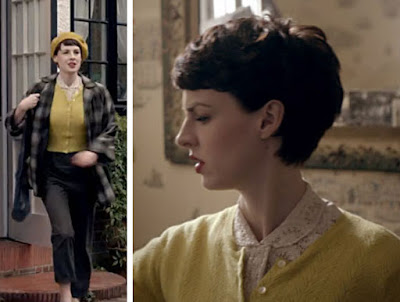 Tommy
I'm slowly growing to appreciate the subtlety of menswear, though the likes of Bruce Partington-Plans and Norton of Morton are more likely to grasp the details than I ever will. In general, Tommy is smartly suit-clad – well enough for gangsters to mistake him for a wealthy man. 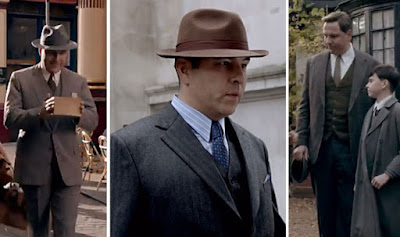 However, while Tommy does his best to conform to expectations, his artistic side comes out when he relaxes, as his dressing gown shows. I did like the way his soft, curvy paisley contrasted with Tuppence's sensible tailored pyjamas; it's a nice hint at the way they don't completely adhere to 1950s gender roles in their relationship. 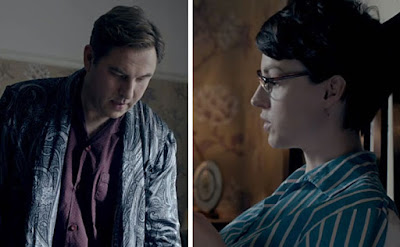 Albert Pemberton
Science teacher Albert Pemberton, who helps Tommy and Tuppence, is almost the perfect 1950s schoolteacher in his tweed jackets and tank tops. His wooden arm, replacing a hand blown off when he worked in bomb disposal during the war, hints at bravery and less scholarly talents. There's something very cosy about the way Albert is dressed, with all that wool, and I think the viewer is supposed to find him charmingly, and unthreateningly eccentric – though the only person who should ever be seen in on land a duffel coat is Paddington Bear. 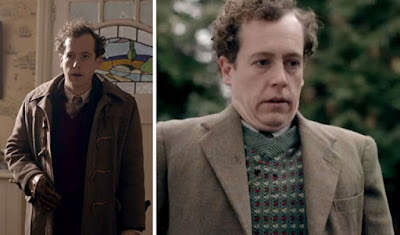 Ne'er-do-wells
Gangster boss Whittington wears a suit, but the lapels are a little too wide, it's all just slightly too showy. His equally unpleasant underling wears a rather nasty print shirt, and you can see his vest – clearly lacking in refinement. As for Whittington's fedora and raincoat combo, that's straight out of the Film Noir Book of Villains. 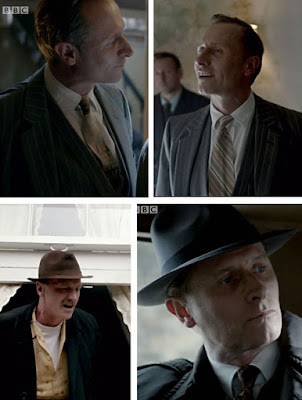 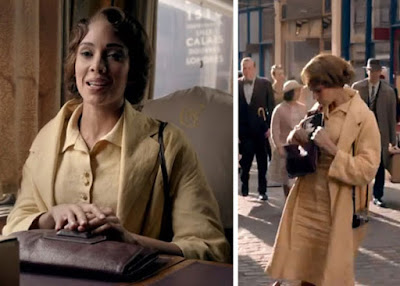 These are American characters. The first time we see Jane she's very worried and very smartly dressed (albeit in need of a good ironing), though nothing in particular stands out. Julius is rather flamboyant, with his patterned scarf and biscuit-coloured suit, compared to the besuited British chaps. He is both rich and American, and a lot of the Brits in the show were civil servants and spies and therefore would be trying to pass unnoticed. One thing I did like is the way Julius and Jane wore similar creamy tones, as if to underline their connection. 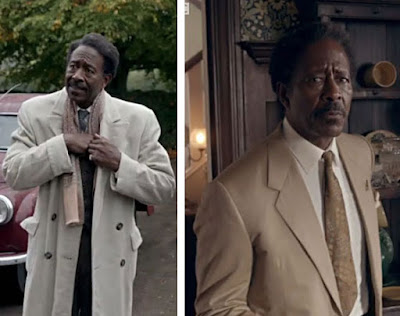