Recent purchases and a good read 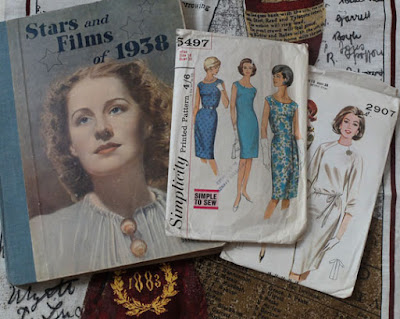 Finally the charity shops have started yielding some goodies again. I would say 'not much in the way of clothes', but today I found exactly what I needed (modern) to adapt for my burlesque costume in Oxfam for £8. (I'll probably do a proper post on my costume purchases/work at a later date, though without revealing the exact theme.) Last week I gave a couple of 1940s dresses to a local chazza with a specialist vintage section - I explained to the manageress what they were, so hopefully they will get a decent price for them - and perhaps that's topped up my charity shop luck. 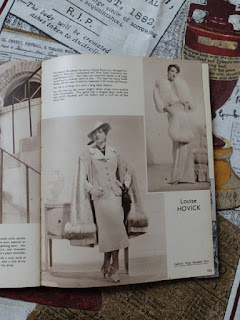 Also in the past few weeks I found a 1938 film book, and two 1960s dress patterns. The patterns are too small for me (one has a 38-inch bust and the other a 36-inch bust), but I can't sew anyhow so I suppose it doesn't matter! I thought I'd buy them while I had the chance and who knows, one day I could make them. I'm really into this super-simple sort of dress. Too much frou-frou has never been my style, and just adds bulk to my frame that I don't need. Something like this in an interesting fabric is just the ticket.

The film book is super. I always check these things for pages missing or damaged. To be honest, I'll accept a bit of either. This one was pristine, though. Nothing scribbled on, nothing cut out. There are six pages of 'Six Stars Featured in Six Pages of New Modes', which immediately made me think of Cate. Louise Hovick here is coyly referred to as 'The former Broadway favourite, Gypsy Rose Lee', but she was, of course, one of the biggest names in burlesque. My teacher reckons Gypsy Rose once held an audience spellbound for an entire hour simply removing one glove. That's not talent, that's a superpower. Here she's wearing a cape suit "of beige tweed over a smartly tailored suit. The cape has heavy black flecks, and the note of black is repeated in the crepe silk blouse." The white crepe evening dress is "beaded with rhinestones", which is no more than I'd expect from a burlesque superstar.

There are lots of great pictures in the book, and previews for forthcoming films. This preview of an Errol Flynn film made me think of another blogger - this one's for you, Melanie! 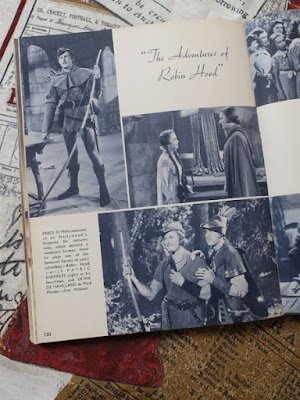 And now for the good read I promised you.

I'm still unable to resist the British Library's reprints of classic crime novels when I see them in Waterstones. I've reviewed two other novels by John Bude (The Cornish Coast Murder and The Lake District Murder), both written earlier than this. You really see his style developing over the three, as this one is by far the most satisfying. In it, Inspector Meredith has relocated to the Sussex Downs, in the 1930s still very sleepy and rural. Commuting from there to London wasn't the done thing back then! Two brothers own a farm and lime kilns; rumour has it that the wife of one married the wrong brother... and then the car of one is found, with blood inside. Soon bones start turning up and it's up to Inspector Meredith to solve the mystery.

I'm pleased to say that while I anticipated the ending, there were a couple of twists that I hadn't picked up. I really enjoyed the entire thing. You get to see the way mid-1930s forensics worked (a friend who's a forensic anthropologist who loves crime novels will be appalled at the handling of the bones!), which is fascinating. This book would make a great TV programme - the BBC or ITV could do a whole series of Inspector Merediths, as Bude kept writing them. As it is, I definitely recommend it if you enjoy vintage crime novels.

By the way, I've photographed everything on an Ashes commemorative teatowel - if you like cricket, you'll understand!
Labels: 1930s 1960s books craft crime film