The Man from UNCLE: One of Our Spies is Missing 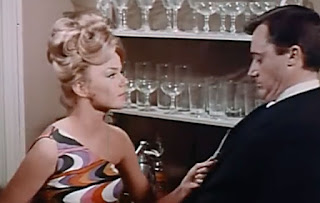 While we're all waiting for the new Man from UNCLE film to hit the cinemas on the 14th (or am I the only one bouncing in anticipation?), why not enjoy one of the original films?

One of Our Spies Is Missing sees American UNCLE agent Napoleon Solo sent to London to investigate the mysterious rejuvenation of a scientist. This being the 1960s, it of course involves talking to models in a couture house to begin with. Meanwhile, his Russian colleague Ilya Kuryakin is investigating catnappings in Soho. You'd think that looking into cats going missing was rather beneath Kuryakin's level, wouldn't you? However, it's fortunate for UNCLE that he is involved in the Mystery of the Missing Moggies, as it appears the cats and rejuvenation process are linked, and tie into a THRUSH plot to manipulate politics.

If you've seen the TV series, it's an edited version of a two-part story from that, though it does feel rather different. There's a wonderfully 1960s soundtrack, including poppy renditions of 'Rule, Britannia' that lifts things rather. The film looks great; I expect many a gent will envy Solo and Kuryakin's sharp suits, even if they don't usually like vintage. (The forthcoming film also uses some vintage clothing, which should look great. I hope they do the 1960s originals justice.)

I have an immensely soft spot for David McCallum, so couldn't really fail to enjoy this film. David McCallum and cats; it's just missing a big pot of tea and a pile of books and to be Mim Heaven.
Labels: 1960s film spy