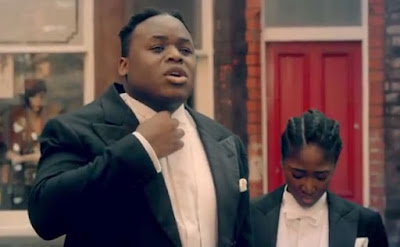 “It’s what white people do, like skiing or brunch.”

So says one of the four lead characters in ITV2’s new time-travelling comedy, Timewasters. The premise is simple: a quartet of young, black British jazz musicians get into a lift with a tramp, and end up back in the 1920s. As they’re jazz musicians, the fall on their feet relatively quickly, being picked up by a pair of posh twins to play at their birthday party.

I’m on the fence about this one: on telly, time travel has been largely for white characters, a few of Doctor Who’s sidekicks aside. But it’s a fish-out-of-water comedy, and that means everything’s been done with really big, broad strokes. If you’re looking for any sort of nuanced appreciation of the 1920s, and the cultural shifts that happened then, you won’t find it here, and often the differences between then and now are pushed to ridiculous levels for laughs; for example, drug use wasn't unknown among the Bright Young Things, but nor was it common, and you certainly wouldn't have had an aristocratic young woman cheerfully shrieking "COCAINE!" at party guests.


There is an edge to the comedy, of course; the way Lauren, Nick, Jason and Horace are perceived in the 1920s often pokes at the way people of colour get treated today. My favourite bits, however, are when the four main characters interact with each other. Of all of them, Nick’s my favourite, because he is such a nerd and gets into the best scrapes, being interrogated by John Logie Baird and almost carted off to join a strange cult in South America. Jason is also entertaining; clearly someone who never paid attention in school, he cheerfully blazes into situations confident his good looks and charm will carry him through in the end, completely modern and knowing nothing whatsoever about the era he's found himself in. (Half the fun there is that Nick knows the most history and gets in muddles, while Jason breezes through.) The youngest member of the group, Horace, is enthusiastic but gets things hopelessly wrong; whereas sensible Lauren suggests investing in stocks and shares so they'll be loaded when they get back to the 21st century, Horace's first idea was that they could burn a witch.

The posh twins, Victoria and Ralph, aren’t nearly as well-drawn, and tend to feel like a bundle of 1920s aristo stereotypes crammed into two roles. (Posh! Dim! Giddy! Indulged!) This isn’t their story, of course, but I think a lot of situational comedy works best when you have some feeling for the characters, and with Victoria and Ralph so hard to feel for, they’re also hard to laugh with.

As there are only six episodes of Timewasters (the three shown so far are available on catchup), I’ll probably watch the remaining ones. It’s not really a show for vintage lovers, more one aimed at an audience of young people of colour, so I’m not sure how many readers of the Robot would enjoy it. At the moment it isn't showing the potential to be another Goodnight Sweetheart. But even if it’s not completely successful, I really hope in future time travel isn’t still something mainly white people do.
Labels: 1920s television