I did a post on five style lessons I've learned from The Avengers, and Sarah raised the subject of Star Trek. “I could definitely do a post on science fiction costumes,” I thought. It's been a struggle to pick just five, even keeping things within my 'nothing after the 1980s' blog rule, so I started by narrowing it down to the ladies. (Would you like to see a similar post on the chaps at a later date?) Princess Aura made the cut, but Buck Rogers space vixen Princess Ardala did not, and I wasn't actually sure if Wonder Woman should be in the mix – I suppose comics are sort of SF, but they're not the first thing that springs to my mind when I think of the genre. As much as everyone loves Carrie Fisher, I never liked Princess Leia's bun hair and white dress. Here are the five that made the grade… 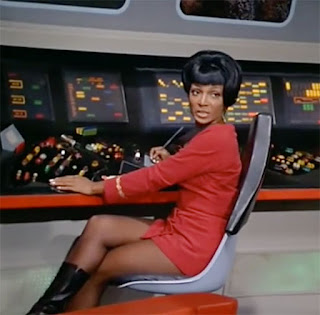 By today's standards, Star Trek's Uhura is fab: brainy, efficient, holding her own in the boys' club that is the Enterprise's bridge, but by 1960s standards she was groundbreaking. At that time African-American ladies' roles on telly were usually limited to maids and other menial jobs. Perhaps the women's costumes in original Star Trek were a little skimpy – as Dax comments in the Deep Space Nine episode 'Trials and Tribble-ations', in the 2260s “women wore less” – but Uhura also made them look good. Red was definitely her colour, and she rocked her big hoop earrings. Uhura was professional, respected and hot stuff. All hail the mini of liberation! 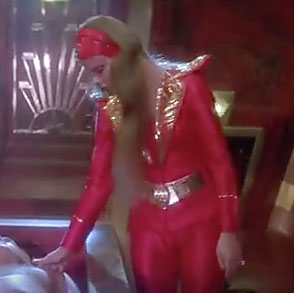 Goody-two-shoes Dale Arden may have been Flash Gordon's favourite girl, but Princess Aura had all the best outfits, whether you're looking at the 1930s serial movies or the 1980 campfest. I have a great deal of fondness for the latter, and do think that Ornella Muti, who played Aura in it, is one of the most beautiful women of the 20th century, up there with Louise Brooks. She could even rock red-and-gold eyeshadow, which would make most people look consumptive. Anyhow, we're talking about clothes. Did anyone ever look as good in spandex as Muti? For me Aura's red suit outshines all her more flamboyant, if skimpier, party clothes, which look a little like she bought a Halloween outfit called 'sexy pagoda' from a fancy dress catalogue. (This one still has a bit of that going on around the lapels.) I love the wide headband, too. Very Brigitte Bardot.

Servalan's scarlet tulle
By the end of the 70s, women aspired to be more than mere princesses. (Yeah, we've slipped back a bit in that respect.) Servalan achieved her position as Supreme Commander of the Terran Federation through hard work. Um, and then becomes President after staging a coup. But you can't deny that she didn't work to get where she was. In the early episodes of Blake's 7, Servalan wears mainly pristine white – though always dramatic in style, at odds with her severe haircut. Servalan never saw a luxury fabric she didn't like, or couldn't wear. Her confections of sequins and feathers would please a Vegas showgirl, or possibly a drag queen. While there are many standout outfits in her wardrobe, from a coat of ermine to a funnel neckline made of crystal and wire, her scarlet sparkly gown with ENORMOUS tulle ruff-collar is the one you'll never forget. (Annoyingly, it's also one I really struggled to get a shot of!) I, for one, welcome our new glamazon overlord. 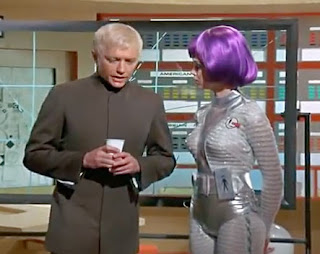 As any lover of vintage SF knows, something somewhere has gone badly wrong because we should all be living on the moon by now. And the moon should resemble the galaxy's best disco as, according to UFO, we'll all be wearing silver lurex catsuits topped with silver lamé hotpants and purple bob wigs. Nina Barry, Gay Ellis and all the other ladies of Moonbase wear this uniform, though the reason it's so suited to the Lunar environment is never actually explained. Day-to-night dressing would never be a problem if you went to work in this get up – in fact, you might have to dress down to go out in the evening. Just stick to drinking shots because it must be murder trying to get that lot off every time you need a wee. 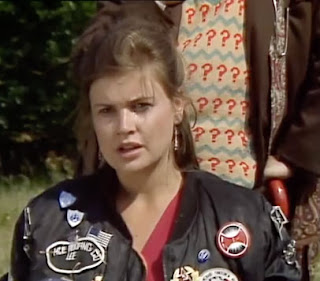 I wouldn't wear a bomber jacket myself, but I love the way Doctor Who's companion Ace dressed. All of the ones I've mentioned so far have been pretty saucy – who doesn't like a bit of sauce? But Ace was a young woman who dressed for herself, and that was a big thing for girls into science fiction back in the 1980s. Ace was the first companion I actually wanted to be like. Sophie Aldred was great fun, but Ace wasn't there to titillate. Given some of the Doctor's earlier companions, Leela in particular, this is significant. That's why her outfit makes my list.

Science fiction costumes usually – and especially for women – seem to represent the fashions of the day, pushed to another level. The youthful, still slightly scandalous, mini of the 1960s becomes an unremarkable uniform in its vision of the future. In the 1970s, life seems to be one long session at Studio 54, though as Servalan shows, with great power comes great responsibility to be glamorous. Ace's look isn't what we'd think of as 1980s, and some of the Doctor's other companions probably had a more stereotypical 80s look (Tegan, Peri), but Ace is a ramped-up version of the streetwise girl of the 1980s, all boots and tough-cookie clothing.

What all of the costumes have is confidence and strength, and that's probably why I like them.
Labels: 1960s 1970s 1980s costumes film science fiction television