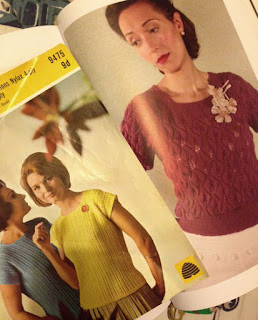 My crafting hasn't got off to a brilliant start in 2017.

I'm supposed to be knitting a (non-vintage) cardigan for a friend right now. I made a good start, only my tension was all wrong and it was coming out way too small, so I ripped it back... and then realised I didn't have the right size needle. As it's being done in one piece from the top down I'm using a circular needle. (For non-knitters, that's two points joined by a long, flexible cable, and it enables you to knit longer pieces than conventional needles, and tubes if you like.) I'm fussy about circs; I've used Pony ones but the join between cable and needle isn't completely smooth in the ones I've tried and I get annoyed at my knitting catching slightly. I've ordered a Chiaogoo red lace needle from Purlescence, but while I wait for that to turn up my thoughts have moved on to knitting things for myself.

No, I still haven't sewn the second sleeve on It Cannot Fail To Please. Let's not talk about that.

Oh, okay, let's talk about it: I got rid of a couple of jumpers that I wasn't completely happy with* late last year, so I really SHOULD sew that sleeve on. It's about to turn cold and I will be grateful for a new jumper when it's snowy. That can be my task for the weekend. It's probably a better idea than doing what I want to do, which is order a load of King Cole Bamboo Cotton 4ply from Black Sheep (they have it on sale) and start knitting myself 1960s summer tops in lime green or turquoise. I have several crates of yarn already, and if I cast on something new, it should be using yarn I already have. I haven't bought much new yarn in years but those crates don't seem to be getting any emptier.

I've had a bit of upheaval to start the year, and that's made me go running for the 1940s again. There's something about that make-do-and-mend decade that seems comforting when things need dealing with. 1940s big band swing is my go-to music for housework, and I have a Rosie the Riveter coaster on my desk at work to encourage me. I've been very much wishing I had a new series of Agent Carter to look forward to, and looking at my clothes and thinking, “What would Peggy wear?” Don't worry, I'm not going to bin the Crimplene. The 1960s style suits me, and when things feel more settled and cheerful I'll be embracing all that playful colour again. I'll just skew things towards my me-made 1940s knits and sensible woollen skirts for a few weeks. It's nice having a diversity of decades in the wardrobe to draw on.

Are you making anything at the moment?


*Such Flattering Puff Sleeves, which came out perfect but simply felt too, well, sleevey for me, and Jersey With A Soft Bow which I used an unsuitable yarn for and which came out too long in the body and saggy in the arms/shoulders.
Labels: knitting