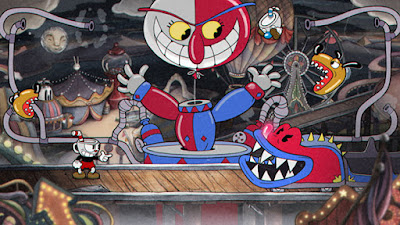 This is going to be about music, not videogames, so don’t go away yet! Cuphead is a new game, yes, but that’s not the interesting thing. What you will appreciate is how deliciously jazzy it is. The whole thing has been designed to look like a 1930s animation. The tale of Cuphead, who sold his and his friend’s souls to the devil and now has to battle to get them back, is absolutely beautiful. And to go along with those perfect 30s animation looks, it’s got a wonderful soundtrack. The developers specifically asked composer Kris Maddigan to come up with something that sounded like genuine Depression-era music, played by a proper big band.

While the music is faster than music of the 1910s-30s on the whole – it needs to be fast to give a sense of urgency to the action – it’s incredibly reminiscent of early jazz. ‘Inkwell Isle One’ and ‘Forest Follies’ feel splendidly ragtime, with a piano plinking in a way that makes me imagine the frantic scenes from a 1910s Keystone comedy, while ‘Floral Fury [boss]’ gives off a Xavier Cugat-style Latin vibe. The start of ‘Sugarland Shimmy’ isn’t ‘Sing, Sing, Sing’ but has that quality, though it quickly becomes something very different, still with a 1930s Big Band feel. Maddigan has said Duke Ellington was his biggest influence while composing, and it really shows. 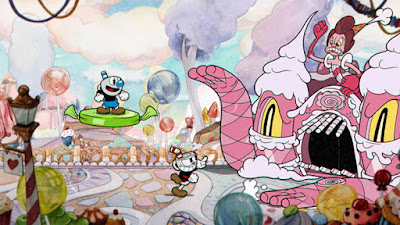 I’ve been listening to the Cuphead soundtrack on YouTube while I work, and greatly enjoying it. Annoyingly for me, there doesn’t seem to be a way to get it on CD yet. It is available on vinyl, as there’s a big market for videogame records. As I don’t own a record player, I guess I’ll be sticking with YouTube for now.

And, in case you’re wondering, I haven’t played Cuphead. Besides the fact that it’s not available on PS4, which is what I own, it is, by all accounts, absolutely nails-hard. One of the best gamers I know took days to complete it. I’ll just have to keep listening to the soundtrack.
Labels: 1930s videogames