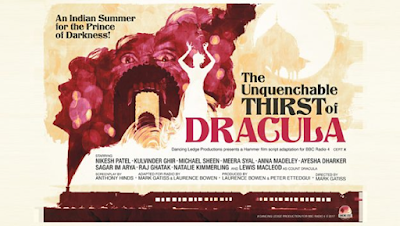 One of the great studios in the history of horror films – in my view, surpassed only by Universal – and indeed the only truly great British one was Hammer. Radio 4 has turned one of the unmade Hammer scripts, for The Unquenchable Thirst of Dracula, into a radio play. And if Hammer isn't enough to lure you in, it's set in the 1930s, in India. The film was very nearly made on location in India in the 1970s. (Thinks: something for everyone who reads this blog in there, I reckon.)

The cast and crew list is truly impressive. Mark Gatiss directs it, and along with Laurence Bowen adapted the screenplay for radio. Gatiss' track record is really impressive. Leaving aside Sherlock, which I loathe, he scripted several episodes of ITV's Poirot and adapted MR James' 'The Tractate Middoth', made documentaries including one on the history of horror, and has written a trio of adventure novels about a character named Lucifer Box. And those are just the highlights. The cast includes Michael Sheen as narrator, and the wonderful writer and actress Meera Syal and dashing Nikesh Patel. You know you're going to be getting a quality Dracula there.

Part of me is really mourning the fact the film never got made. I'm sure they'd have been able to fit Helen in. In my alternate universe, there definitely is a film with Helen as Queen of the Vampires...

The Unquenchable Thirst of Dracula is on Saturday 28 October at 2:30pm, but if you miss it, it'll be on catchup. (I'm not sure if that will work outside the UK, though.)

There's a quirkier approach to Dracula being broadcast on Halloween itself, as comedian Miles Jupp uses Stoker's novel as a sort of travel guide, and gets the train across Europe to Transylvania following Jonathan Harker's route. The Trainspotter's Guide To Dracula is on 31 October at 11:30 am – and, of course, there will always be the option of catchup.

I usually make a Halloween cake for my team at work, so that's what I'll be up to this weekend – I'll make the cake base and pop it in the freezer, then ice it all on Monday night. Other than that I have no plans, which is absolutely blissful to think about. No books to read for SFX, no commitments... I might just lie in bed and stare at the ceiling because I can. I hope yours is as relaxing!
Labels: 1930s 1970s Hammer horror India radio