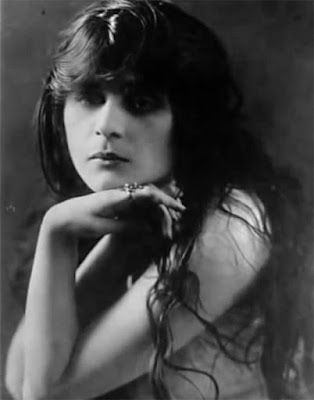 We've had had Bloofer Gents for the past three years, so I think it's time we added another lucious lady of lurkiness to the Bloofer list. And who better than the original vamp herself, Theda Bara?

Once upon a time there was a nice little Jewish girl from Cincinatti called Theodosia Goodman. In 1908 she moved to New York and made her Broadway debut. In 1914, not far off the age of 30 she made her film debut. That was positively ancient for a movie actress then - but we all know that a true vampire never ages. Theodosia had a very small part in The Stain, but caught the eye of a director from Fox Studios, and Theda Bara, raised in the shadow of the Sphinx, was born.

In A Fool There Was the original vamp took men for everything they had – money, love, their very lives – and the public loved it. Off-screen she maintained her vamp persona, wearing rich fabrics and veils, heavy kohl eye makeup, and even petting a snake while talking to reporters. Other vamps appeared, like Nita Naldi, Pola Negri and Valeska Suratt, but Theda remained queen of them all. There was nothing supernatural about the vamps, but in their dark-haired, hungry way they set the template for every witchy woman who followed.

After the all too real horrors of the Great War and Spanish flu the public lost its appetite for vampires, and so Theda retired as a lead actress in 1921, when she married. She died in 1955. Yet her legend endures, despite the fact that of her 40 films a mere half-dozen remain complete. Cleopatra, Salome, Carmen, Camille... roles so powerful they're also the title of the film, all lost. Yet the legend lives on, because the still camera loved the vamp every bit as much as the moving one. 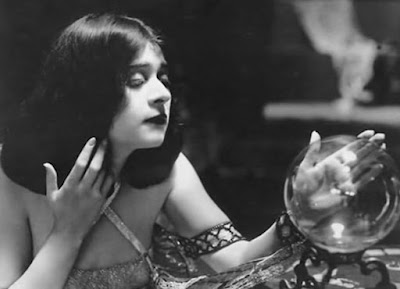