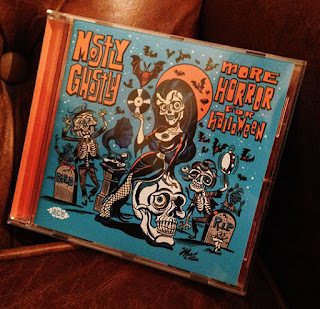 Another Halloween means another CD of Halloween music. I had high hopes of Mostly Ghostly, thinking as a mix of 1950s and 1960 novelty songs it would be like These Ghoulish Things. Sadly, it's not everything I'd imagined.

If anything this one reminds me of one of my less-favourite Christmas CDs, Dr. Demento Presents The Greatest Christmas Novelty CD Of All Time, and I own that one because it's got 'I Want A Hippopotamus For Christmas' on it. You're probably wondering what a Christmas CD and a Halloween one can have in common. Well, it's that the focus of both is on the comedy aspect of the novelty songs more than the musical ones, so they don't hang together completely satisfyingly as albums. The changes of pace or tone between songs can be too jarring.

That said, there are some corkers on this. Screaming Lord Sutch's ''Til The Following Night', Ronnie Cook And The Gaylads' 'The Goo Goo Muck', The Monotones' 'Zombi', and The Naturals' 'The Mummy' are all ones I'll pop on my Halloween playlist on my iPod, but I could happily never hear Chuck Holden's 'The Cave' or Terry Teen's 'The Hearse' again. So I wouldn't say you'd be wasting your money if you bought this, but the tracks are of variable quality and is probably best if you're adding songs to a playlist rather than playing it from start to finish as an album.
Labels: Halloween Music