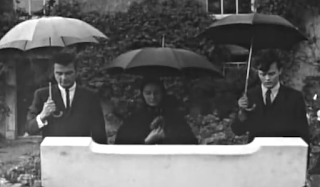 Well, there's an hour and a bit of my life I'll never get back. This 1963 low-budget horror was directed by Francis Ford Coppola (listed as Francis Coppola) and produced by Roger Corman, so I'd hoped it would be a little forgotten gem. Nope! I found this proto-slasher really quite dull.

It's supposed to be set in Ireland, but only one character has an Irish accent, and that didn't sound very convincing to me, though I'm not Irish so there's always a chance it's a regional one I'm not familiar with. The American wife – widow, actually, but she's not letting on that he's dead – of one of the members of a very odd family goes to stay with his mother and brothers at their castle in the hopes of wangling his way into his mother's will, and finds them all going through a strange ceremony to remember the long-dead daughter. Slasher shenanigans ensue, though they are very, very tame.

Perhaps I've watched too many modern horror films. This simply couldn't match up on the gore front. And stripped of that, the shallow characters and plot, and the lack of tension, is really marked. The film tries very, very hard to make you suspect the obvious killer isn't the axeman, but it stands out a mile who's responsible. It's not very frightening at all, really. Perhaps someone, somewhere feels the same way, as Dementia 13 has been remade and the new version was out at the start of this month. 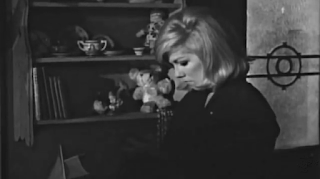 On the plus side, I noticed that in the first scene one of the characters is wearing an aran cardi very similar to the one I've owned since I was 16, so at leat I picked up some styling tips...
Labels: 1960s film horror