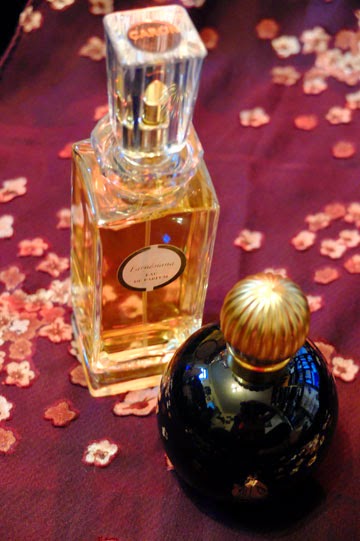 This week I decided it was warm enough for my perfume collection to go on its annual migration. Light and heat are bad for ‘fumes, so all mine are kept in their boxes, and in summer they get moved from my bedroom, which gets stuffy during the day, to the darker, cooler, dining room. I simply popped them into a very large paper bag to move them en masse... and the bottom fell out. Houston, we have a problem.

None of the bottles were harmed in any way, but it did make me wonder if I might have hit my fragrance limits. Tough if I had, as I’d already placed an order with allbeauty.com, one of my favourite discounters. They’d got a delivery of Caron scents in. I adore Caron, but they’re jolly pricy. However, I have been worrying about reformulations/discontinuations; Caron discontinued Narcisse Noir before I had a chance to stock up for posterity, so I bought a backup bottle of French Can Can to stash, and one of Farnesiana, which I’ve had a sample of and loved but hadn’t got round to buying. And then a bottle of Lanvin Arpege fell into the basket too.

This sounds rather extravagant, but Mum had given me some money from some left to her by my stepnan, who gave me my first-ever bottle of perfume. (It was an Avon one in a bottle shaped like Jemima Puddleduck.) Buying some gorgeous scents seemed like a fitting way to remember her.

Farnesiana doesn’t smell like a scent from the late 1940s, though that’s when it was invented. To me it smells Edwardian. It has a watercolour florality, like Guerlain L’Heure Bleu or Grossmith Phul-Nana. I’d been looking for something to replace L’Heure Bleu since perfume ingredient regulations forced Guerlain to butcher that scent, and on my first sniff of Farnesiana I knew I’d found it. That’s probably due to the fact that both contain heliotrope, giving them a deliciously almondy quality. Farnesiana is a much sunnier perfume than L’Heure Bleu, though, as it pairs heliotrope with mimosa, while L’Heure Bleu matches it with sweet, cool violet.

Arpege was first made in the 1920s and smells like it; it’s a classic aldehyde like Chanel No. 5. If you like Chanel No. 5 but find it’s out of your budget, I’d recommend trying Arpege on in a department store to see if you like it, then if you do you can get it cheap from an online discounter. Arpege is a real ‘Miss Fisher’, in that it’s elegant but forceful, very much of its era and impossible to ignore.