Been shopping at Vintage Nostalgia...

Well, I'm back from Vintage Nostalgia! I got quite badly sunburned yesterday, so now I'm hiding inside in the shade. (I have to confess, I got a bit stroppy with my husband, because I'd asked him to tell me if I looked like burning, so getting back to the tent and discovering my shoulders matched my coral dress - and hurt - turned me into a five-minute diva.) You'll have to wait a day or so for proper photos from the event as Mr Robot's taken better photos than me but he hasn't got them off the camera yet. In the mean time, I thought I'd share a few of my purchases.
It probably looks like I've bought a lot, and I did indeed take plenty of money, but that's because last year I was really impressed with the things people were selling and wished I'd had more cash with me. In the end, I didn't spend as much as I could have. 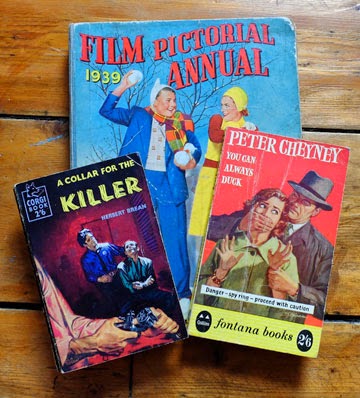 First up, books! I'm a sucker for crime novels with lurid covers, and can never pass up a reasonably-priced film book either. I could have bought more crime novels but as I have a reading backlog that's probably a couple of feet high, I settled for just two. The film book is missing one page of film star portraits, but that's it. All the pages are mono, and I guess that's saved it from being mauled too badly - I've got full-colour film annuals from the 1950s in much worse states. 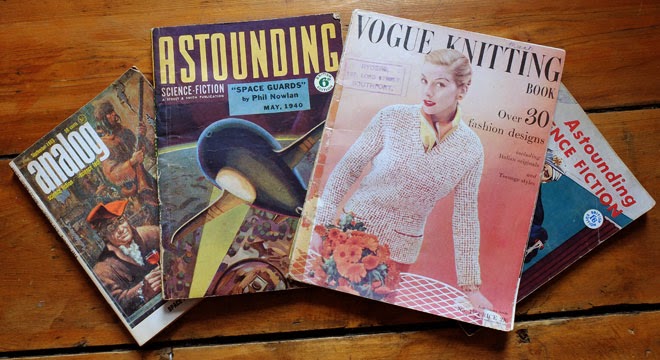 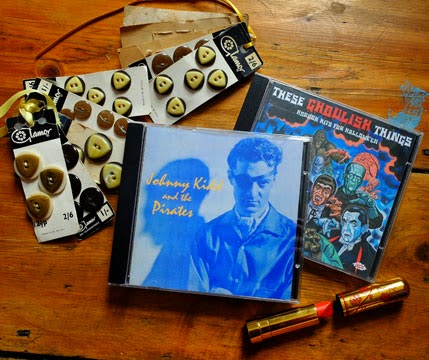 Random purchases. I've given up fighting the 'Robot' part of Crinoline Robot; I like science fiction and old horror films and The Addams Family and things like that, so how could I resist a whole CD full of late 1950s/early 1960s monster songs? And it doesn't contain the usual suspects like 'The Monster Mash', 'Purple People Eater' or 'Flying Saucer Rock 'n' Roll' either. For all I know it's going to be rubbish, but I had to have it. The buttons were two packs for the price of one, and by choosing two sets in similar colours I got a matching lot of one type of button. And there's a Besame lipstick in Carmine. I'd wanted to try a Besame lippie for ages, but £20+ would be a lot to spend on something by mail order if it turned out to be unsatisfactory. Both the lady on the Vintage Hair Lounge stall and Pete reckoned this was my colour, though I'm wishing I'd stuck to my guns and got a deep winey-red Merlot instead.

The other two things I got were a poufy white petticoat to go under the coral dress - you'll see that when I bung up my event pics - and a print day dress, which I reckon is 1960s. I got that cheap as the armpits have been torn and not well repaired. However, it has a soft self fabric belt, so I reckon I can shorten that my a couple of inches and use those inches to patch the pits. It's currently in the wash with a load of Oxy; I'll fill you in on the repairs as I do them.