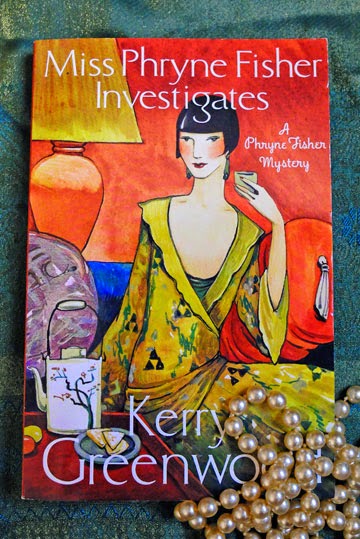 I know I'm not alone in enjoying Miss Fisher's Murder Mysteries on telly. (I believe Bruce at Eclectic Ephemera was the blogger who first mentioned the programme here in the UK, though Aussie bloggers will have known about it for much longer, of course.)  Anyway, I enjoy it in the same way as I enjoy Murdoch Mysteries, because it's colourful and fun, not because I think it bears a massive resemblance to the real era in which it's set. In fact, I've enjoyed Murdoch more as it's got more far-fetched and playful.

Both series are based on novels, but I hadn't read any of the books than inspired the shows until this week, when I spotted a copy of Miss Phryne Fisher Investigates in Bath's Oxfam bookshop. This is the first novel in the series, and I was keen to see how it compared to the programme. The answer is: the two are very similar.

The first thing that struck me was how hard the programme makers have worked to make their Phryne Fisher like the heroine of the books, from her shiny black cap of hair to her appetite for flamboyant clothes and her flippant attitude. In this first novel she also encounters many of the regular characters from the series, including Dot, Bert and Cec, and Dr MacMillan. Phryne has travelled out to Australia to check up on a young woman whose parents fear is being poisoned by her husband; of course things are not that simple.

Like the series, the novel falls more on the side of 'fun' than that of 'historically accurate'. That isn't to say there are any glaring anachronisms, but it does all feel highly improbable, with its exotically attractive Russian dancers, dope ring and aristocratic ne'er-do-wells. I don't mind that - you can say exactly the same of David Roberts' 1930s-set books about Lord Edward Corinth and Verity Browne (I've previously reviewed Sweet Poison/Bones of the Buried , Hollow Crown/Dangerous Sea and Something Wicked). Sometimes you need a bit of fluff, and if you want something more period-perfect, you can always hunt down some old green-backed Penguins and read those. I don't know that I'd buy any more of the Miss Fisher books on paper, as shelf space is at a premium here at Casa Mechanica, but I'd certainly pick them up on Kindle.
Labels: 1920s books crime