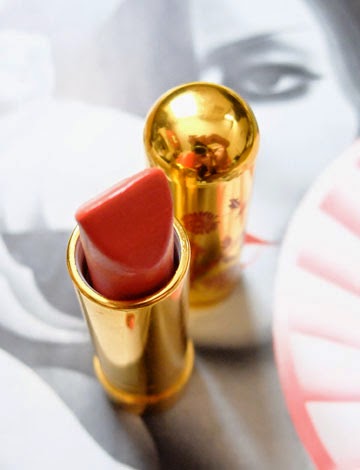 Perfume aside, I don’t often write about cosmetics on here. Let’s face it, there are people who have much more experience with makeup, as for most things I find a brand or colour I like and stick with it - hence my collection of identical brown eyeshadows. I do love a good lippie, though. I’d been interested in Besame lipsticks for a while, and the fact that the firm had worked hard to recreate vintage colours appealed to me, but there was no way I was spending £20+ on one without seeing them for myself first. No mail order gambles!

I recently bought my first Besame lipstick (note use of ‘first’) at the Vintage Nostalgia show. It’s in Carmine, an orangey-corally-red shade I’d never have picked, but one of the ladies on the Vintage Hair Lounge stall reckoned it would work on me. She’d had plenty of experience of putting the colours on all sorts of people, so I decided to listen to her. Mr Robot also thought it would work. And you know what? It does look pretty good.

The shiny bullet packaging is lovely, though I’m worried about it getting all scuffed up in my handbag so have popped it into a little cloth bag. That probably sounds a bit precious, but I doubt I’d spent over £8 on a lipstick in my life before this, and probably wouldn’t have bought this one if it had been in, say, Boots, rather than at a wonderful event where I was caught up in the joy of shopping for vintage goodies. Having spent as much one one as I’d normally pay for three lippies, I’m determined to keep this one nice for as long as possible.

It wears really well, without bleeding even on my 40-year-old lips, which makes it pretty much everything I’m looking for in a lipstick to wear to work, and does make it better value than expected as I don’t need to use it so often. If I put it on before leaving home in the morning, as long as I don’t eat anything mid-morning it’s still there at lunchtime - it lasts just fine through a cup of tea or two. It doesn’t dry, though if you’re prone to dry lips it’s worth exfoliating with an old toothbrush as the lipstick can cling to dry patches. There’s no flavour.

Despite the cost, I’m really pleased with this lipstick and definitely plan to buy more. It’ll be a while, though, as they’re a bit spendy.
Labels: cosmetics