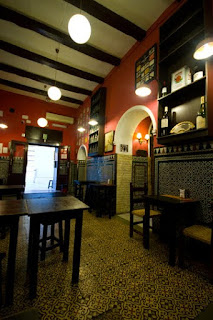 Like the British pub, the Spanish tapas bar can be vintage, but isn't always. Sometimes it looks fairly modern but one has been in that spot for ninety years, other times one will look traditional but be barely a decade old. (For example, sparkling, well-lit Taberna Miami, the third and fourth photos on this page, was opened in 1930.) Being mad about Spain, and not mad about the British winter, I thought I'd share some sunny photos and some notes on pub crawling in a vintage Spanish style.

First up, your tapa is for you and you alone. If you sit at a table and order a big pile of dishes to share, that's not tapas. The tapas tradition started in Andalucia, when barmen would put a little saucer on top of drinks to keep out flies. Then they started putting olives on the dish (after all, a salty snack never hurts drink sales). That evolved into the custom of having a little snack with your drink, some bars became popular for certain things they put on their saucers and so a custom came into being. The Spanish have a verb, tapear, to go for tapas, and for that you go from bar to bar, having a drink or two and a tapa in each.

While I can't decide if it's Granada or Toledo that's the place I've had the best tapas, my favourite Spanish city, and the one I've explored most thoroughly, is Seville. Ten years ago, most of the bars in the Barrio Santa Cruz (the old town) served tapas. Now, with more frequent flights from all over Europe (Ryanair now fly into the city), more and more serve raciones and medio raciones, plates and half-plates. They're the same good food, and do take pressure off the waiters in what is now quite a busy tourist centre with organised groups of up to 40 people apt to descend on a single bar at once (can you imagine doing two little dishes each for a group that size?), but it's still a bit of a shame. The was the case at one of our old favourites, Agua Y Viada, although they still do the best sangria I've ever tasted. And yes, sangria is very touristy, but it's not as though Mr R or I could pass for Spanish, so why not do the tourist thing? 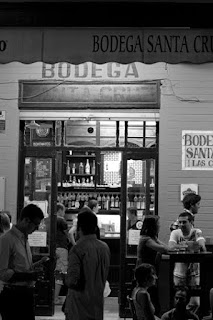 Other tapas bars I'd recommend in Santa Cruz are Dona Lina (which has the most spectacular tiled interior, as you can see in the first photo on this page, and has tortillitas on its menu, little shrimp fritters that are somewhere between a pancake and a prawn fritter) and Bodega Santa Cruz (in the black and white photo, serves lots of bocadillos, akin to mini paninis with fillings such as chorizo or morcilla, black pudding, in). For our favourite, though, it's a toss-up between El Toboso and Meson El Cordobes. El Toboso is tiny, with perhaps half a dozen tables, but they do some really unusual tapas, and it's one Santa Cruz bar where you're guaranteed to find Sevillanos stopping off. There's usually only one chap serving, and you will have to wait if they're busy, but if you can't wait, Spain is not the country for you. El Cordobes is brightly lit and looks quite modern, and there's always football on the telly, but the flamenquines are exceptional, both in flavour and cheapness, the host is very chatty (Mr R usually ends up discussing football in Spanish with him), and they have a staggering array of drinks on offer. On our last night, Mr R ordered saffron gin. Saffron gin. You've never come across it? It is an acquired taste. I was trolleyed, so I ended up finishing it for him.

If you're on a budget, I would recommend you tapear in Triana, the district across the river, instead. T de Triana, a modern tapas bar, in probably my favourite there, although the fish bar right at the end of the waterfront nearest the market is another place we always have to stop, Mr R for adobo (marinated dogfish chunks) and me for puntillitas (whole baby squid in batter), and I think Taberna Miami is now on our list of stop-offs! 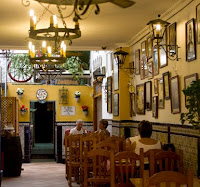 How to find a good tapas bar
Be very careful about going into places with translated menus. In particular, avoid anywhere with pictorial menus or national flags on the menus. Places that rely on tourism don't have to worry about their customers coming back.

Step off the tourist track. Our favourite bar in Toledo was in the old city, but next to a government building. No tables outside. We knew it had to cater to the local trade, which meant it had to attract repeat business.

Don't be put off by a place not looking olde-worlde or particularly plush. The Spanish know good food, and somewhere that looks quite basic can serve brilliant grub. If a bar doesn't look fancy, customers are coming in for other reasons. What's more, it used to be customary for people to sling their napkins on the floor. That doesn't happen as often, but a plentiful supply of metal boxes at the foot of the customer side of the bar is sign of a place that attracts locals. 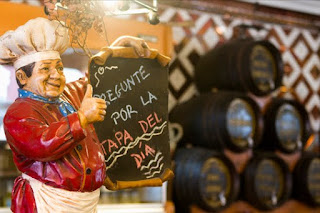 And when you've found one...
Drink inside at the bar. You'll hear more Spanish, and it's honestly much more fun.

And ffs, DON'T amble up to the barman bellowing, "Do you sell beer? Beer grandy?" like one oaf we saw in Seville. Learn the word for wine or beer. It's not hard.
Labels: food Spain travel