Everything stops for tea 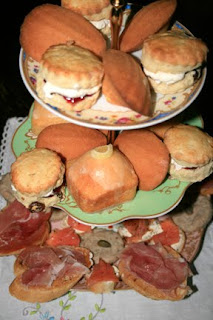 Another of my Christmas presents – you're going to see a lot of these over the next few weeks – was a cake stand and some baking tins from Mr Robot. The tins are the good quality, heavy duty baking tins. I've had cheapo flimsy ones and they're just not as satisfactory in the long run. The stand is made to look like one fashioned from vintage plates, but is actually made from new pieces. I like that, because whenever I see real vintage plates turned into cake stands I picture someone somewhere with a teaset in need of that plate or saucer and feel a little sad.
Anyhow, with Mr Robot at work today I had plenty of time and space to put my new tins to work. Things didn't go quite as planned: I made the scones first, because they were fastest and left the mixing bowl clean enough to make Irish lemon cake. The recipe for that is from Cakes Regional & Traditional by Julie Duff. She's spent years researching recipes from around the UK and Ireland, collating different versions of classic recipes and looking into the history of each, and I heartily recommend that book. The recipes might not seem flashy, but all those I've tried from it have been delicious. I used my tin of mini squares for that, making 12 little lemon cakes.
Then crisis time! First, I had only two eggs left. I wanted to make the French madeleines from Mary Berry's Ultimate Cake Book to test my new madeleine tins. I had to do some recalculating on quantities. Then it turns out that French madeleines contain lemon, which I had not anticipated, never having made them before. 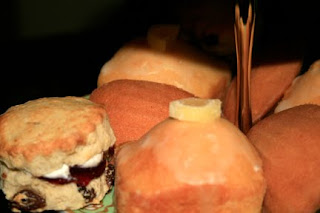 So, if (when!) I do an afternoon tea again I will make sure the cakes aren't two-thirds lemon ones. I've test-frozen some scones and some madeleines to see how they store. Making three lots of cakes from scratch every time is a terrible faff, but making one lot and getting some frozen ones out won't be. The savoury bits are bagel slices topped with salmon and cream cheese, walnut bread rounds with pork rillettes and a caper and toasted thin baguette slices with olive oil and jamon serrano. No, the latter isn't very traditional, but I like it. Next time I will try to make some form of small savoury quiche or barquette for a greater variation in texture, but overall I think the savoury part of this tea is better balanced than the sweet.
Who'd have thought planning an afternoon tea would be so tricky?
Labels: Christmas food homewares robot data