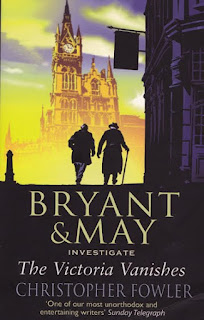 When a man is tired of London, he is probably also tired of Christopher Fowler's novels, and a boring git to boot.

I'm not totally sure that this book is completely suitable a subject for this blog, but my gut instinct says it does fit. It wasn't written in the past, nor is it set in the past, but like most of his books anyone who loves real history and quirky stories may well find it just their thing, and I think most people reading this blog do have a love of history.

Fowler's been writing for a few decades now – I've been reading his books since about 1990. He started out writing horror, but back in 2004 started writing 'straight' crime fiction in the form of the Bryant and May novels. I say 'straight'; what happened was the supernatural element disappeared from the stories but the quirkiness remained, and his books started being stocked within the popular 'crime' section of the bookshop rather than the less lucrative 'horror' part. Bryant and May had popped up in his novels before getting their own series in the early 2000s. (In fact, the 2005 crime novel Seventy Seven Clocks is a rewrite of 1993's supernatural Darkest Day.)

So, who are Bryant and May? A couple of detectives, past retirement age, who run the Peculiar Crimes Unit, a small group of police who look into all the crimes that are simply too strange for the regular force. Bryant is small, shabby, bookish, erratic. May is elegant, forward-thinking, incisive. If you're reading this blog, I think you'll appreciate their detective sergeant Janice Longbright, who styles herself like a pin-up, with 'Ruth Ellis hair' and ever-present high heels. The whole team are misfits, and most of them are proud of that.

The real character in almost all Fowler's novels is, however, London. White Corridor was set partly in a blizzard in the West Country; it was not his best book. He knows, and loves, the secrets of the city. I, a country mouse, have always been frightened by London, but Fowler makes me yearn for it, and when I do have to go there, I find myself looking for the hidden sculpture on a plain bridge, the nondescript building that hides a long-buried river or a Tube air intake or stands on the spot where someone glamorous and notorious once took tea. Fowler has made me love his city in a way no guidebook or film ever has. What's more, he loves it all, its housing estates and its palaces, its fine restaurants and its kebab vans. His London is no Richard Curtis London, no backdrop for the twee amours of the vaguely posh. Fowler's London is dirty, smelly, noisy, crowded, inspiring, liberating, heaped with history on history, good and bad. Fowler's London is complete.

In The Victoria Vanishes, Arthur Bryant sees a woman going into a pub on his way home from a night in a different pub, and when she turns up dead is shocked to find the pub is no longer there, it was demolished eighty years earlier. While he's trying to work out if he's losing his marbles, other murders take place, with clues to the killer all hidden in the names and histories of the pubs in which they take place. It's a great story, perhaps a bit farfetched but great fun nonetheless (and if you want true to life, you can go and watch one of the great British miseryfest soap operas and good luck to you).

One sad thing: in the acknowledgements Fowler notes that the book "takes place in some of London's quirkiest public houses. Since writing this book, some of these have already been destroyed or badly converted by greedy developers." What a shame! There is a list of all the ones mentioned in the back, and I shall definitely try to visit one or two next time I am in London but not at work. As I said Fowler's more inspiring than any tour guide...

Christopher Fowler's blog is here.
Another great blog for lovers of London history is Another Nickel in the Machine. Utterly fascinating forgotten history and faces from the past. I love it.

This book was a Christmas gift, so free to me, but no-one's paying me to review it!
Labels: books