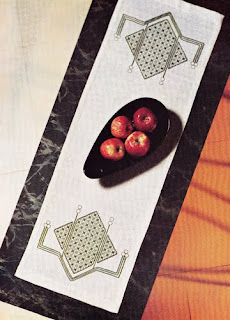 In my past two pieces on vintage embroidery styles (Jacobean and cutwork) I’ve said that needlework styles tended to get bigger and bolder as the 20th century moved on, with thicker, darker or more colourful threads being used and, eventually, more delicate styles dropping out of fashion. As cutwork’s popular appeal was fading, new styles, frequently “counted” (with stitches worked across a set number of threads) became popular. Nowadays the most commonly seen one is cross stitch, but in the mid-20th century one that became popular for home furnishings was blackwork.

Blackwork is exactly what you’d expect: embroidery done in black, usually on white. It has its roots in Tudor styles, but the modern version is always counted, and geometric filler patterns are used to provide shading in place of colour.
It starts coming up more frequently in the magazines of the late 1950s, and its boldness and geometry meant its popularity continued into the 1970s. The earlier designs tend to be floral, in keeping with traditional needlework motifs, but by the 1970s it’s unashamedly abstract, often done on very bright fabrics. The first design you see here is from the later 1960s, the second is from 1960, and you can really see how suite 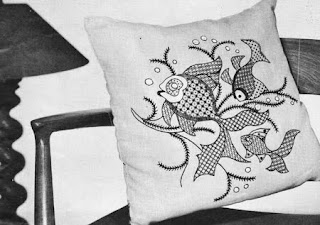 d the filler patterns were to more graphic designs.

If you’re a novice embroiderer, blackwork is a fantastic style to start with because it’s counted and so it’s very hard to make a mistake (and if you do make a mistake, it’s easy to snip out the faulty bit and re-do it).
Labels: 1950s 1960s 1970s craft embroidery