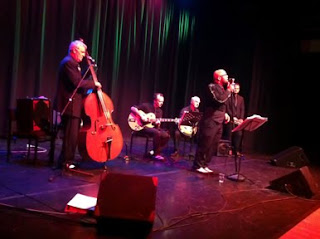 Mr Robot and I had a rip-roaring time last night. The Arc Theatre in Trowbridge hosted 'A Duke Ellington Christmas', with singer James Lambeth and four musicians (whose names I can't remember because I had lots of beer to drink) on double bass, guitars and trumpet.
For the seating, round tables with chairs had been put up in front of the stage, lending the theatre a pleasingly clubby feel. The Arc is a modern building, and while it's never going to have much atmosphere in itself, it doesn't clash with the tone of anything going on there. We dressed up, Mr Robot in his suit, fedora and raincoat and me in my Able Grable Miss M and a cream angora cardigan from Monsoon. The cardigan was an emergency purchase before a party last winter when I realised the dress I planned to wear didn't cover my bra well. Its puff shoulders complemented the sleeves of the dress, so I didn't end up with weird overstuffed looking upper arms. I had hoped people would dress up, and there was a gaggle of lovely people there to celebrate a birthday party, all red lips, sparkly jewellery and stockings. Who says Trowvegas doesn't do glamour? They all helped bring a bit of vintage atmosphere to the place.

The structure of the band lent itself more to a 50s jazz sound than big band arrangements. We hadn't been sure of it would be all Christmas music, but it wasn't. It was all wonderful versions of classic Duke Ellington numbers including 'Perdido','Take the A Train' and 'It Don't Mean A Thing (If It Ain't Got That Swing)'. We both enjoyed every minute of it, happily tapping feet and fingers along, and all but floated home, although that may have been partly thanks to the beer.

There's only one thing I would have changed about last night - I'd have filled the Theatre with people! Music this good, with beer or wine, for £10.50, less for concessions? WHERE WAS EVERYBODY? The place should have been packed. The film It's A Wonderful Life is showing at the Arc on Tuesday. Price? A mere £2.50. Bargain. I'm going, and I hope it's well supported. The Arc is probably closing its doors as a public theatre soon, so if you want to make the most of it while we've got it, there's also the DS Big Band performing on the 27th of January. And yes, I've bought tickets to that too. Tickets for that are a ridiculously affordable £9.
Hear James Lambeth for yourself!