A touch of Wimsey 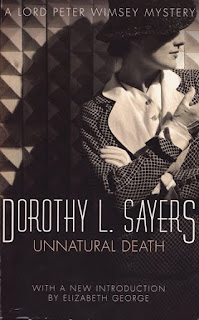 Of late, in between work and knitting, I’ve been rediscovering the pleasure of reading Dorothy L Sayers Lord Peter Wimsey detective novels. I’ve no idea why Wimsey hasn’t gained quite the following of Agatha Christie’s most famous detectives, because all the elements are there, from fascinating plots to the possibility of exquisite Art Deco settings.

I think Sayers was in many ways a better writer than Christie; her command of language and characterisation is better, although Christie was the mistress at creating a world the reader could sink into without effort, and you can't beat her novels for an 'immersive' experience. Sayers nudges the intellect, Christie the instincts.

Peter Wimsey himself is a great character, a second son who served with great bravery during the Great War, and came out of it shell-shocked, so plays the fool, the man-about-town. He collects rare books and drives fast cars. He develops over the course of the novels, realising early on that he cannot take detection lightly when someone’s life will depend on what he does (the stories being written in the days of the death penalty), falling in love, marrying... He may be fictional, but he lives a life.

The two novels I’ve most recently finished reading are from the 1920s, Whose Body? and Unnatural Death. In one a body simply appears in a bathtub in a block of flats, and in the other Wimsey is determined to prove a seemingly natural death was murder. He is greatly helped by his friends in solving both cases. Bunter, his former batman, now his butler, Detective-Inpector Parker, and Miss Climpson, a chatty spinster Wimsey pays to investigate and collect gossip where he himself is unable to in Unnatural Death, are all wonderful characters. I’m especially fond of Miss Climpson, a character who really could only exist in the aftermath of the First World War, when the country was flooded with ‘surplus’ women. Sayers was never afraid to raise contemporary issues in her novels.

Of the two, I think Whose Body? is my favourite, although both are enjoyable. (That said, I should warn you that Unnatural Death does use offensive terms for people of colour on a few occasions, although not in the authorial voice, nor from Wimsey, and the one Caribbean man in the book is portrayed as a man of great dignity and respectability.) I think I prefer Whose Body? because there's simply more Wimsey in it, and because it shows clearly the effect of the war on him, and on his attitudes towards detection. I'm reading another Sayers, The Documents in the Case, now. It's her only Wimsey-free major novel – and somehow not as much fun. You need a touch of Wimsey in your detective fiction...
Labels: 1920s 1930s books crime