The joy of buttons

Maybe it’s because I’m feeling the need for more cardigans, but lately I have been button mad.

I never used to have many clothes. We were very hard up when I was a kid, so I got used to having one coat, one pair of shoes and so on, and so got into the habit of buying the plainest ones possible because they had to go with everything else. That’s probably where my love of a plain black dress comes from. (I’m in good company; when Sophia Loren first moved to Rome to make a career in films she had one blouse and one skirt and dyed both black so they would be suitable for any occasion.) I don’t think I ever had fancy buttons on anything. Now I’m a knitter, I can have all the lovely cardigans I want, with whatever buttons I choose, even if I knit something that only goes with one skirt.
As the year has been ending, I’ve bought a few vintage buttons. I got some square blue Czech glass ones at the fleamarket in St Andrew’s Hall when we went to Norwich for a weekend. They had another packet or two, and I wish I’d bought the rest now! The ones you see here were all from the By Jam stall at Clothes Show Live. I had a lovely chat with the lady from By Jam, and she knows a chap who lets her have access to his old buttons. I nearly bought three sets of the larger one (three in different colours in a pack) but I spotted the smaller yellow ones and just had to have them. 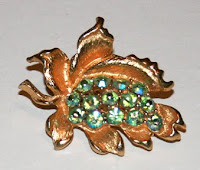 I also got this diamante brooch at Clothes Show Live, from Tea and Scandal (whose website seems to be down right now, so no link). In a few more weeks, my resolution to buy more brooches will end. It’s been a good resolution; I’ve stuck to it. I think for 2012 my resolution will be to buy more buttons!
Labels: clothing craft jewellery shopping