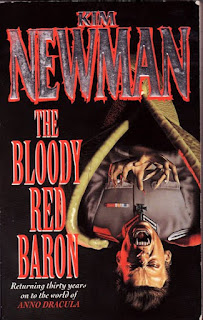 I've mentioned Anno Dracula by Kim Newman in the past (reviewed it and mentioned the reprint). The Bloody Red Baron is the second book in the series, so if you want to read Anno Dracula without spoilers, stop reading this review now.

Anno Dracula was set in Victorian times, with the Count having seduced and married the widow of Windsor, becoming the new Prince Consort. He had to flee Britain at the end, driven out by angry living and dead Britons. The Bloody Red Baron sees the Great War at its peak, with Dracula as chief military advisor to the Kaiser. The pilots of all-vampire Condor Squadron have been observing, and battling, JG1, the flying unit headed by Baron von Richthoffen, the Red Baron himself, and something strange appears to be going on at the castle where JG1 are based. Charles Beauregard, hero of Anno Dracula, is now an aged spy and sends his young protege, Edwin Winthrop, along to Condor Squadron to help investigate. What are the Germans working on at the chateau? 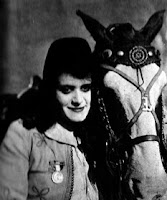 I've had this book since it came out in paperback in the mid-1990s, and I never rated it as highly as the first in the series. That's possibly to do with the fact that I didn't get as many of the cultural references then, but to be honest you need to share Newman's extensive and unique enthusiasms to get them all. Over 15 years ago I could spot Biggles and his chums, Count Orlok, Dr Caligari, Simon Templar, Bulldog Drummond and so on, but Sadie Thompson, Kent Allard, John Ashenden and the like were mysteries to me. As I've heard more books on the radio and read more books, I've come to get more of them (such as the brief reference to a girl called Cigarette – I don't know which version of Under Two Flags Newman takes his Cigarette from, but I picture Theda Bara, who I've seen in stills and who you see here). The real figures are almost all real figures who would have been alive during World War I, from Mata Hari and Peter Kurten to Winston Churchill and Herbert Asquith.

In case you are worried that the war itself is treated flippantly, rest assured that it is not. The historical aspects are treated with respect. I still don't think this book is up to the standard of Anno Dracula, but it does come pretty close, and as alternate histories go is extremely enjoyable.

(I was actually lucky enough to meet a World War I fighter as a child. In her teens, my mum went to work for Wing Commander Fry and his wife, and years later took me and my brother to meet them. I was pretty young, however, and my main memory of the entire day is of being bitten by a horsefly.)