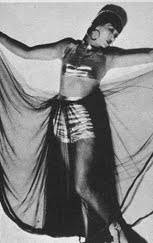 Retro Chick did a lovely post on tanning a couple of days ago, which brought up some questions about skin tone and vintage, and whether the current popularity of pale skin among a lot of vintage enthusiasts makes people of colour feel unwelcome. To start with, I'd like to say that I don't believe anyone I've met wouldn't welcome a person of colour. If you have felt that way and are reading this, COME, JOIN IN!
The thing we all come up against is history. I'm going to get a bit personal here; my paternal grandfather was Anglo-Indian and came to Britain in the 1930s. (For anyone who doesn't know what an Anglo-Indian is, Wikipedia has a great page on Anglo-Indians.) There was never any mention that he might not be completely European. My tan-skinned, black-haired father was put down to our Irish ancestry. And reading books from the early to mid 20th century, I know exactly why my granddad didn't talk about his Indian ancestry. There's the shifty Anglo-Indian in Edgar Wallace's The Green Archer (who actually turns out to be a bit of a hero, and he and his wife are my favourite characters in the book, but that doesn't stop Wallace playing on the preconceptions people had of Anglo-Indians). I nearly threw Barbara Worsley-Gough's Alibi Innings across the room, so appalling was its portrayal of the one Anglo-Indian character: starting out as a handsome man who flew heroically in the war, once his ancestry is revealed he suddenly becomes cowardly, childish and a thief. It makes me so angry. This is how my kind, hard-working relatives would have been seen. And I'm not of African or East Asian ancestry; the portrayals of those races in most vintage crime fiction and classic films is infinitely worse.

Then there's the real world. For example, the 1980s have very different associations to someone white British than to someone with black South African ancestry. Maybe I think too much, but I find it hard to encounter something from a particular time without also thinking about how people like me were treated at that time. It's a sobering experience, and I doubt I'm alone in that. And most of vintage is about putting on a certain sort of whiteness, because it mostly follows the dominant trends of the time, which were set by Caucasians.
However, vintage isn't about reenactment. I, a married woman, work and have my name on a mortgage. Scandalous if this were the 1930s, but it isn't. We're in the 21st century. Personally, I would love to see more people of colour involved in vintage and celebrating vintage in a diverse way. (I think this country needs much more awareness of its multicultural heritage.) So pop on that frock like the ladies on the Windrush would have worn or channel a deco-loving Maharajah of the 1930s, all are welcome.
Images:
Top: Anna May Wong in The Chinese Parrot
Second: Sammy Davis and Eartha Kitt in Anna Lucasta
Labels: robot data